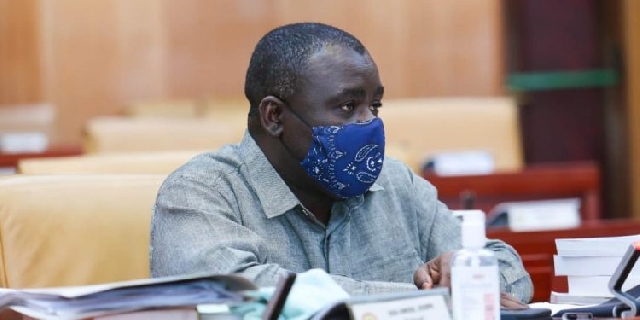 The Minister-designate of Transport, Kwaku Ofori Asiamah, has told Parliament’s Appointments Committee that it will not spearhead the legalisation of the use of motorbikes for passenger transport.

“We will not be able to legalise okada today because the numbers are not pointing in the direction that we should”, Mr Asiamah told the Committee during his vetting on Tuesday, 23 February 2021.

According to him, “considering the fact that enforcement is a problem in this country based on the current information on the grounds, it will be difficult for me to spearhead the legalisation of okada.”

In the lead-up to the 7 December 2020 polls, former President John Mahama promised to legalise Okada if he won the election.

Speaking to the chiefs, people and party supporters at Kpando in the Volta Region on Friday, 21 August 2020, the then-flag bearer of the National Democratic Congress (NDC) said: “I've been seeing young people who have finished school and they can’t find a job and, so, they are looking for something they can do and many of our young people are riding motorcycles and transporting people from place to place, and we call them Okada”.

“But in our law, it says Okada is illegal but Okada is a reality, it has come to stay, you can't stop it, and, so, I've suggested and I say when we come into office, we will legalise Okada but we will regulate it”, Mr Mahama said.

He explained further: “We will regulate it and we will give them training so that they can do their business safely without causing the lives of people, they must obey all the traffic regulations in order that they be allowed to pursue their profession”.

Okada serves as the main means of transport for so many communities in the remotest and rural parts of the country such as northern Ghana. They are also popular in big cities due to the convenience they afford users in terms of beating traffic.

It has been the source of livelihood for many people in the country.

For instance, Alhaji Tijani Umar, an Okado operator, told Class91.3FM last year that he feeds his four wives and 16 children from that business.

Speaking in an interview with Benjamin Akakpo on the Executive Breakfast Show (EBS) on Class91.3FM on Thursday, 9 January 2020, Alhaji Tijani, who plies his business at Ashaiman in the Greater Accra Region, described the Okada business as an important source of livelihood for the sustenance of his family.

“I’ve four wives, 16 children. Formerly, I was a scrap dealer… and everything was not going [on well]; if I didn’t join the Okada [business], I cannot feed them [family].

“My family knows that I’m an Okada rider. I even have one adopted daughter at Legon, I visit her always with my Okada and her friends laugh at her that her father is an Okada man but I know what I’m getting, I know what I’m fetching, Okada is a good business”, he told Benjamin Akakpo.

According to Alhaji Tijani, Sundays are the best days for the Okada business.

Alhaji Tijani has been an Okada rider for seven years and makes GHS1,000 a month from it.

Ghana’s Road Traffic Regulations 2012 (L.I 2180) prohibit the use of tricycles and motorbikes for commercial purposes.