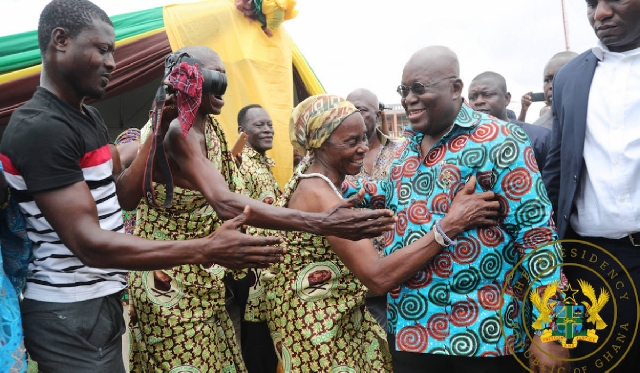 President Akufo-Addo and some cocoa farmers

President Nana Addo Dankwa Akufo-Addo has reiterated his government’s commitment to ensuring that the agriculture sector becomes one of the most valuable and major driving forces of the country’s economy.

The President made this known in his Farmers Day message.

Farmers Day is celebrated annually across the country on every first Friday of December to recognise the work of farmers and fishers and reward their efforts.

In a Facebook post on Friday, 6 December 2019, President Akufo-Addo said: “I salute all farmers and fisherfolk and award winners across the country for their hard work, perseverance and cooperation with government agencies during the course of the year.”

He also urged the farmers and fisherfolk “to build on their successes, and move on to even greater heights in the years ahead.”

The President noted: “Agriculture will always be pivotal and central to Ghana’s development efforts, and my government will continue to prioritise and support agriculture to make the sector one of the most valuable and major driving forces of Ghana’s economic development”.