"I've paid your husbands, so, Christmas'll be great" – Akufo-Addo to wives of contractors 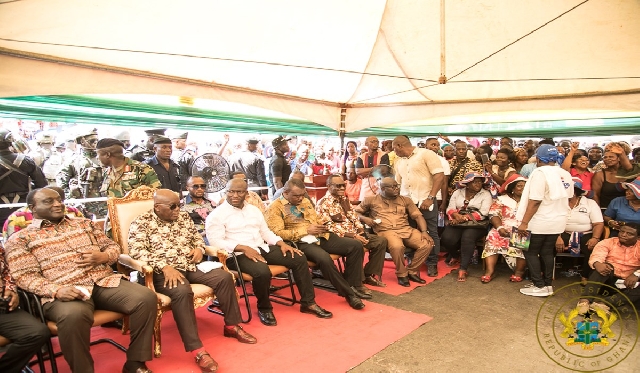 President Nana Akufo-Addo has told wives of contractors that he has paid their husbands and, so, this year’s Christmas season would be an enjoyable one.

To the women, in particular, the President said: “Some of your husbands who are involved have been paid, so, if they have not made you aware, kindly tell them that I say they have been paid”.

“They [your husbands] are aware”, the President insisted, adding: “So, this Christmas promises to be great for you traders and for all of us”.

Two months ago, the President released GHS2.2 billion through the Ministry of Finance for onward payment of debts owed road contractors.

“The good news does not end here”, President Akufo-Addo said on Monday, 21 October 2019 when he cut the sod for the construction of the Obetsebi-Lamptey Interchange located on the Obetsebi-Lamptey roundabout.“The Ministry of Finance has released GHS2.2 billion to the Ministry of Roads and Highways for payment for works done by road contractors across the country”, the President announced, adding: “This will improve the cash flow of our contractors, and ensure that those who had left their construction sites return to complete their projects”.

During Tuesday’s walkabouts in Okaishie as part of his three-day tour of the Greater Accra Region, President Akufo-Addo also told the market women and traders that the matter of high interest rates is of grave concern to him even though interest rates have reduced considerably since his assumption of office in January 2017.

He said he has directed the Governor of the Bank of Ghana to initiate discussions with the banks on how to bring the rates down, and was hopeful that “very soon, it will yield good results, and the rates will eventually come down.”

The President noted further that a significant allocation has been given to the Microfinance and Small Loans Centre (MASLOC) so as to ensure that traders can access loans to enhance their business.

On the reforms undertaken in the banking sector, President Akufo-Addo explained that even though the steps taken “may have had a toll on you”, he indicated further that “the consequences would have been dire if we had not taken those bold decisions. I urge you to remain patient, as, very soon, you will feel the benefits of these reforms.”