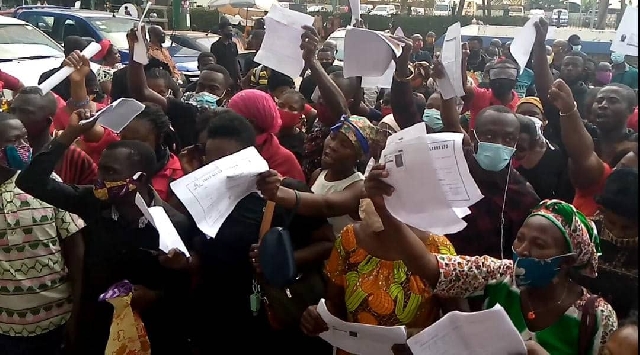 Aggrieved customers of defunct savings and loans as well as microfinance companies have accused the Akufo-Addo government of lying about paying 98 per cent of its members whose deposits got locked up after the financial sector clean-up exercise undertaken by the regulators.

The aggrieved customers in the Ashanti region, on Thursday, 13 August 2020, picketed the receiver's office at Adum, Kumasi over the matter.

Numbering about 200, the angry customers were clad in red and black attire.

They wailed and chanted war songs at the premises of the receiver’s locked offices.

They later converged on the Adum Maranata Church premises where documents of proof of non-payment were collected by their leaders.

Some of the customers who spoke to Kumasi FM threatened to vote against the governing New Patriotic Party (NPP) if their locked-up funds were not paid.

About two weeks ago, President Nana Akufo-Addo said his government had paid all the locked-up deposits in the nine local banks that collapsed and 98 per cent of the funds that got stuck in the over 386 microfinance institutions, finance houses and savings & loans companies that also went down.

The banks and financial institutions were collapsed by the Bank of Ghana within a space of two years in a clean-up exercise of the financial sector.

In the mid-year budget review that was presented to Parliament in July, Finance Minister Ken Ofori-Atta said the government is spending GHS21 billion in picking up the tabs for the clean-up exercise.

Speaking on Koforidua-based GBC-owned Sunrise FM in the Eastern Region on Tuesday, 4 August 2020, President Nana Akufo-Addo said the state is not indebted to any Ghanaian or institution that fell victim to the collapse of the nine local banks.

“All those who had deposits in the banks, all of them, their monies have been refunded”, the President said.

“Let me repeat it: All those whose savings were in the banks, all those savings have been refunded and paid to the people”, he stressed.

The President said but for the central bank’s intervention under his watch, the depositors would have lost all their funds since the affected banks were already on the brink of collapse.

“In fact”, he noted, “the intervention of the central bank was all to protect their savings because many of the banks that finally went into receivership were about to collapse”, adding: ‘Their situation was dire, and if they had been allowed to collapse, all those deposits would have gone up in smoke”.

He said: “As far as the microfinance and savings & loans institutions are concerned, 98 per cent of the deposits of the funds have also been paid”.

The President conceded: “There is still a balance”, noting: “The receivers, Nipah and the others, are working on it and I believe Nipah has gone so far as to say that by the end of August, all of them would have been paid”.

“Yes, there are still some in the system that have not received their money but the effort is being made to make sure that they are paid”, he said.

However, speaking in an interview with Kumasi FM's Elisha Adarkwah, Secretary to the Aggrieved Customers of Defunct Savings and Loans Companies, Mr Ezekiel Annor Akagbo, accused the government of not being truthful about the repayment of their locked-up funds.

“So, we’re staging this peaceful protest to show to the government and the people of Ghana that the percentages in terms of payment that are being peddled around are not true. So, we’re appealing to the government and the institutions involved that they should try as much as possible and within the shortest possible time to bail us out as they promised doing because some of us have been in this pain for over two years now,” Mr Akagbo noted.

Mr Akagbo stated: “So, we beg them, we don’t believe in the figures that they’ve paid 98 per cent or 96 per cent, it’s not up to that. It’s less than 10 per cent. So, we beg of them that we’ll have peace of mind in our homes because most of us have been evicted from our homes, most of us have dropped out of school.”

Mr Akagbo further revealed that the coalition is collating the names of unpaid customers to prove to Ghanaians that the government is peddling falsehood about repaying the customers of the various collapsed savings and loan institutions.

“We’re collating the names and documents of our members nationwide who haven’t been paid yet to prove to the government and the institutions that the figures they’re coming up with are not true because we were made to understand by the Bank of Ghana right from the beginning of the revocation of the licences of these institutions that affected customers are in excess of 3.3 million and now the receiver comes to tell us that he received only 360,000, which is just around 11 per cent of the entire population.

“Yet, they’ve come to tell us that they’ve paid about 96 to 98 per cent, which is not true, so, we want to prove to them that we have the numbers and we present the figures to them and challenge them with the figures.

“And by so doing, the whole country and the citizenry will come to know that we’re speaking the truth and not those institutions”, he noted.

He further assured all the customers that the coalition will fight to ensure that all the members are paid.

“We are in to fight for them, we’re in to protest for them. We’ll make sure that until the last person among us is paid, we’re not going to relent in this fight,” Mr Akagbo added.

Recently, former President John Mahama, who is seeking a comeback, promised to pay all the locked-up funds of the customers of Menzgold Company Limited and other financial institutions should he win the 7 December 2020 polls.

Speaking at an event in Accra to outdoor Prof Naana Jane Opoku-Agyemang as his running mate, the flag bearer of the NDC said: “My heart goes out to the many who have been affected by this Government’s unjustifiable collapse of Ghanaian-owned financial institutions”.

“It is heart-wrenching to hear government officials justify the huge amounts it is spending to manage the impact of the collapse, now put at 21 billion Ghana cedis”, he bemoaned.

He pledged “on behalf of the NDC that we shall pay within one year all who have funds locked up with the collapsed financial institutions. Within one year. I promise!”

“We shall not put up any long-term payment plans that will further worsen the living conditions of the victims.

“As has been introduced in other economies, the next NDC Administration will establish a Financial Services Authority that will be responsible for ensuring that consumer financial markets work for consumers, providers and the economy as a whole.”

“The Authority will oversee all financial products and services that are offered to consumers, and will effectively and efficiently prevent and stop the challenges that have confronted customers of Menzgold, DKM among others.

“We will restore Ghanaian indigenous investment in the banking and financial sector through a tiered banking structure in order to restore viable credit sources for Ghanaian SMEs. We will make amends for those whose businesses were collapsed due to political victimisation”, the former President said.

Also, Mr Mahama said: “We will send all contractors with valid contracts who have been sitting at home for 4 years without being paid for legitimate work done for government back to site”.

“We will make immediate arrangements to pay them their hard-earned monies deliberately withheld by the Nana Addo administration due to politics”.