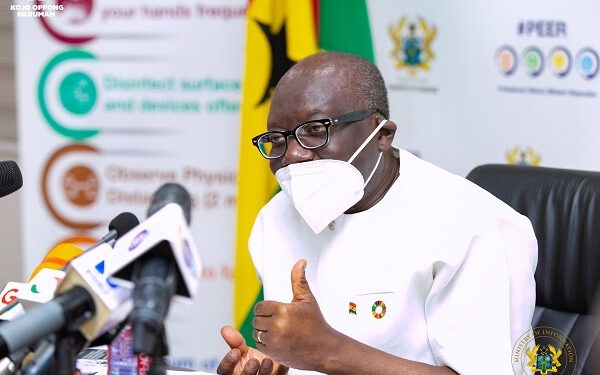 This was disclosed by President Nana Addo Dankwa Akufo-Addo on Tuesday, 22 March 2022 at the Jubilee House.

Mr Ofori-Atta will also be expected to announce the government’s plans on how to cushion the economy in the midst of the current challenges.

“The decision was that the Minister of Finance, on my instructions, is going to have a major engagement with the nation on Thursday, where he is going to be in a position to lay out specifically, the measures we’ve taken and we intend to take, to correct, as it were, put the ship of state, steep on a better keel”, Mr Akufo-Addo said.

Meanwhile, Mr Ofori-Atta has said Ghana is a “proud” nation of “strong” people with the capability to find her own solutions to problems and, thus, will not run to the International Monetary Fund (IMF) for help.

Speaking at the third in a series of town hall meetings in the Northern regional capital of Tamale in February, Mr Ofori-Atta said: “… I can tell you, as my colleague Deputy Minister said, we are not going to the IMF; whatever we do, we are not; the consequences are dire, we are a proud nation, we have the resources, we have the capacity”.

“Don’t let anybody tell you – like when Joshua, Caleb and the 10 others went to spy on the Promised Land and only two of them came to say that, ‘We can do it’, and the 10 went around the community murmuring, ‘You can’t; da da da da da da’; we are not people of short sight and we had to move on, so, let’s think of us as who we are: a proud, strong people, the shining star of Africa and we have the capacity to do what we want to do if only we can speak by one language and ensure that we burden-share in the issues ahead”.

Also, President Akufo-Addo said recently that his government is not unable to tackle the economic crisis buffeting Ghana currently.

Addressing a meeting with the Council of State at the Jubilee House on Tuesday, 22 March 2022, Mr Akufo-Addo said: “It is no secret that our economy is going through difficult times”.

“It is also no secret that we are not alone in that exercise”, he stressed, adding: “The phenomenon that we’re facing, applies to many parts of the world as well. But that doesn’t, therefore, mean that government is impotent in trying to find solutions”.

He noted: “Our retreat which you referred to, is in, some way, quite timely because as a general rule, we have retreats each year on a quarterly basis, and this is the first one for this year.

“Fortunately for us, it coincided with these difficulties and the public anxiety about the way that the economy was going”.

“It gave us, therefore, the opportunity of the three days to look in-depth, where the economy was headed, and what measures were necessary to be taken”, President Akufo-Addo stated.

A few days ago, President Akufo-Addo said his government needs to take some difficult but necessary decisions to spur growth, development and restore the economy.

“We need to undertake the difficult but necessary fiscal and other measures that will enable us to maintain the 2021 and higher rates of growth in the immediate years ahead of us, to develop and strengthen our economy, and help improve the living standards of us all,” the President said the 92nd Speech and Prize-Giving Day of St. Augustine’s College in Cape Coast on Saturday, 19 March 2021.

The President also assured Ghanaians that the policies being implemented by his government, in the wake of the difficulties occasioned by the COVID-19 pandemic, will help the economy rebound faster than anticipated.

Acknowledging the difficult times the nation is going through, President Akufo-Addo noted that every country on the face of the planet, is going through challenges brought forth largely by the pandemic of COVID-19.

The President continued, “Nonetheless, the government continues to work hard to address these issues, and I am certain that, sooner, rather than later, our economy, through the implementation of Government’s one hundred-billion-cedi (GH¢100 billion) Ghana CARES Obaatanpa Programme, will rebound from the ravages of the pandemic, bringing in its wake stability, development, progress and prosperity for all Ghanaians.”