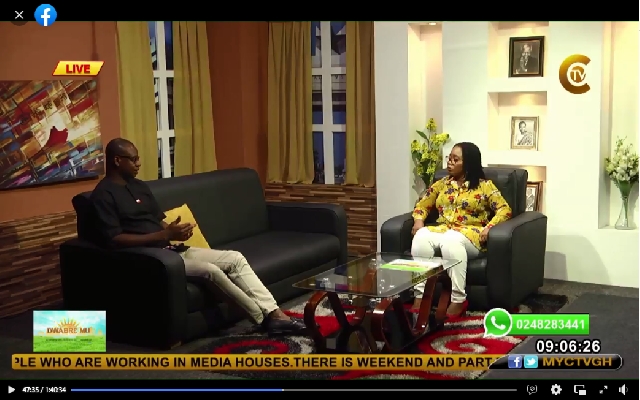 The Head of the Public Relations Unit at the Ministry of Food and Agriculture, Mr Bagbara Tanko (L) speaking to Afia Papabi (R)

The prices of foodstuffs have, indeed, shot up but falling steadily, the Head of PR Unit of the Ministry of Food and Agriculture, Mr Bagbara Tanko has said.

He admitted to Afia Papabi on CTV’s morning show Dwabremu on Tuesday, 19 October 2021 that: “Yes, the prices of foodstuffs have gone up. It’s a fact”.

“Tomatoes, for instance, are perishable, so, when they are in season, the prices are reduced for a quick sale, otherwise they perish and the farmer will be at a loss”.

On the other hand, he noted, “if we get to the season where tomatoes are not in season, tomatoes become scarce and that becomes the time for the farmers to also cash in a bit to support their own economy”.

“So, you see, the season tells the price and the level of production also counts”.