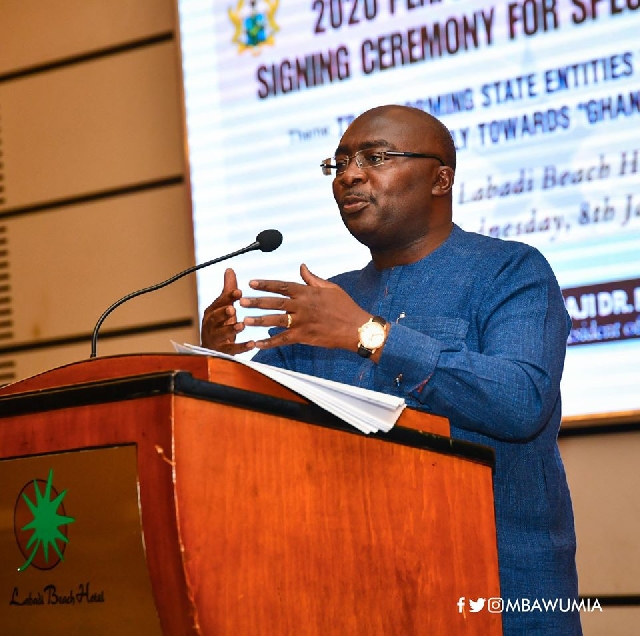 Vice-President Dr Mahamudu Bawumia has assured depositors whose funds have been locked up in regulated but now-defunct financial institutions, including customers of DKM, that the government would pay them in full.

Millions of cash deposited by the customers of DKM got locked up following the Bank of Ghana’s decision to stop the company from operating in 2015 over concerns of violating the microfinance regulations.

The company, which was located in the then-Brong-Ahafo Region, was alleged to have invested millions of its customers’ deposits in its subsidiary companies – DKM Airlines Company, DKM Fuel Station, DKM Transport, DKM Shea Butter Company and DKM Mining Company, among others.

Speaking at the Great Hall of the Kwame Nkrumah University of Science and Technology as part of the two-day Government Townhall Meeting and Results Fair in Kumasi, Ashanti Region, on Tuesday, 11 February 2020, Dr Bawumia said the government empathises with the depositors, who have endured anguish and hardships through no fault of theirs.

The Vice-President accused the previous government of playing the Ostrich and papering over the cracks, which were noticeable as far back as 2012.

“We [Akufo-Addo government] inherited a financial system that was weak and fragile with several institutions that had collapsed or were on the verge of collapse. The Bank of Ghana in cleaning up and strengthening the financial sector, revoked the licenses of many banks, savings and loans and microfinance companies. Some have criticised the action of the central bank for a variety of reasons.

“[But] first of all, let us remember that the failures of financial institutions that we have witnessed recently, were a direct result of a system of poor licensing, non-existent capital, weak corporate governance characterized by related party transactions, political influence peddling, cronyism, among other things.

“The NDC government and the previous management of the Bank of Ghana had ample time to address impending failures. They were aware of the problems in 2015 in the case of banks and as far back as 2012 in the case of savings and loans and micro finance companies. Even in opposition, I alerted the country that on the basis of available data, eight banks were likely to collapse but they refused to act,” Dr Bawumia recalled.

“The swift and decisive action taken by the new management team at the Bank of Ghana provided relief for the financial system as a whole through the funds provided by Government for depositor payouts.”

Dr Bawumia continued: “All depositors of these institutions will receive a 100% refund of their deposits since this was no fault of their own. Government has asked the receiver (working with the Bank of Ghana) to expedite the validation and payment of depositors so that all depositors will receive their monies after validation.

“I will also like to add that this refund will also extend to customers of DKM who have not as yet received the full refund of their deposits. We are therefore cleaning up the mess the NDC created in the financial sector.”

The Registrar General’s Department (RGD), which was the official liquidator for DKM Microfinance, in January 2018 said it had run out of funds to continue paying claims of the customers.

The Department said 80 per cent of the customers had been cleared and the remaining 20 per cent whose investments were above GHS10,000 would receive their claims when funds become made available.