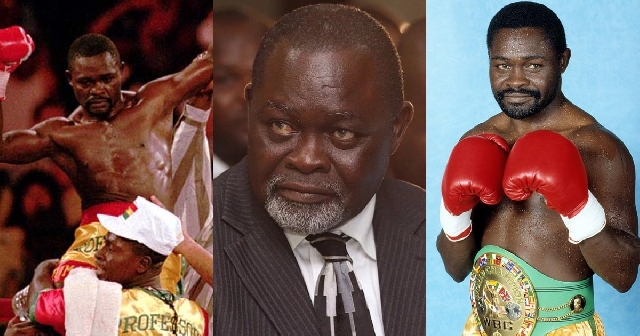 The Akwamu Traditional Council and the Royal Senchi Hotel have honoured Mr Azumah Nelson for his service, humility, discipline and “admirable boxing career.”

Nicknamed Zoom Zoom Nelson, the former professional boxer who was active in the ring from 1979 to 2008 was presented with a citation which reads:

“In recognition of your illustrious and admirable boxing career and serving as a beacon of hope to Ghanaians for several decades.

“We wish to celebrate you for inspiring the entire management and staff to continue to strive for greatness and perfection in all we do. We say ayekoo to you for your patriotism, humility and generosity towards humanity.”

In the company of his wife, Mrs Priscilla Nelson and his manager, Mr Yaw Sakyi Afari, the citation was presented to the 64-year-old boxing legend at a colourful event graced by the Akwamuhene, Odeneho Kwafo Akoto III.

At the ceremony, the Executive Director of the Royal Senchi Hotel, Nana Kwame Yeboah-Afari declared he was inspired by Mr Azumah’s dedication to duty and added, he was a good example for people especially those in the service industry.

Highlighting another reason for the ceremony, he noted how very little was done in society to honour patriotic figures and how resulting from this trend, the quality of service is usually hampered.

Odeneho Kwafo Akoto III, the Akwamuhene, present at the ceremony, was happy Zoom Zoom Nelson had traced his roots to Akwamu. He praised the two-weight world champion for his patriotism, which brought his nation Ghana to international renown.

In response to the honour done him, a fulfilled Azumah Nelson uttered the words:  “I will forever remember this until God calls me.”

The citation presentation and fete happened on Saturday, 24 September 2022. 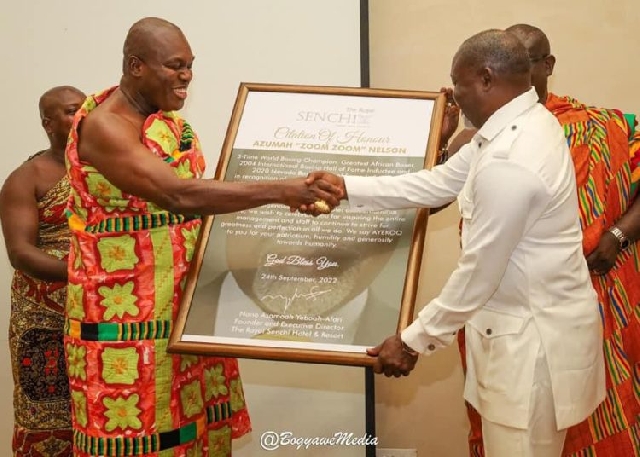