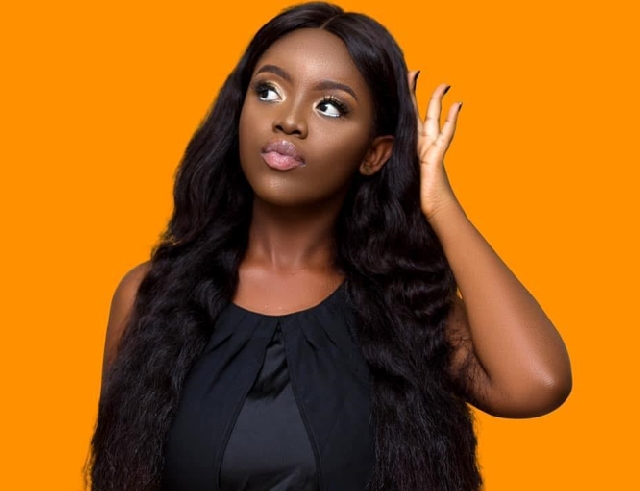 Ghanaian singer Gyakie has renounced earlier assertion she was paid to perform at the Global Citizen Festival.

This follows an interview, the singer granted, where she disclosed she was paid to perform at the recent event.

The singer, however, has made a U-turn saying that was not the case.

On Tuesday, 27 September, 2022, Gyakie had disclosed that everybody who performed on the 2022 Global Citizen Festival stage in Accra was paid.

When asked in a phone interview on Accra-based 3 FM if she was paid the “full amount” for “this job”, Gyakie, nicknamed the Songbird, responded, “Yes.

“Everybody that was involved in the show, whether on stage or behind, everybody was obviously given an amount because everybody deserves that, so every single person was paid. Yes.”

On whether she received a performance fee, the singer-songwriter answered in the affirmative.

“For performance, everybody was [paid],” the ‘Something’ hitmaker said before adding “and obviously, aside that as well, we are also doing this for the [Global Citizen] cause you are mentioning to also get a louder voice to talk about all of that.”

“But aside that, the performances, everybody was most definitely paid,” she stressed.

These statements flew in the face of what Mr Kojo Poku, Chief Executive Officer (CEO) at Big Ideas Consult, a local partner to the Global Citizen Festival, said on the same radio station and show prior to Gyakie’s interview.

Mr Poku had said: “I have to say that no artist was paid a performance fee for this.

“Everyone who mounted the stage did so out of the benevolence of their heart and the Global Citizen cause is bigger than how much you’ll make out of a performance on that stage.”

He stressed: “All over the world, Global Citizen artistes who perform on those stages do not take a performance fee.”

In two tweets sent out today, Wednesday, 28 September, 2022, however, Gyakie appears to have gone back on her utterances on the 3 FM interview.

She said: “We all believed in the cause and the change it’ll bring hence agreeing to be a part of it.”

Earlier, she had tweeted this also: “How on earth do we have a big event like Global Citizen and you assume everything is completely free?

“People worked on it for days to make this successful. When I say we were paid and every one on stage was paid I only meant that, there was investment in the performances.” 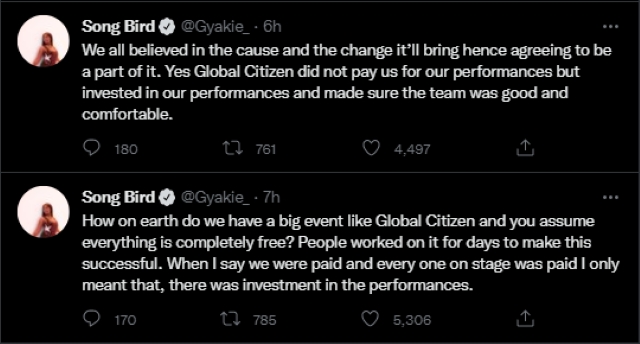