Idris Elba – We can all help solve climate change 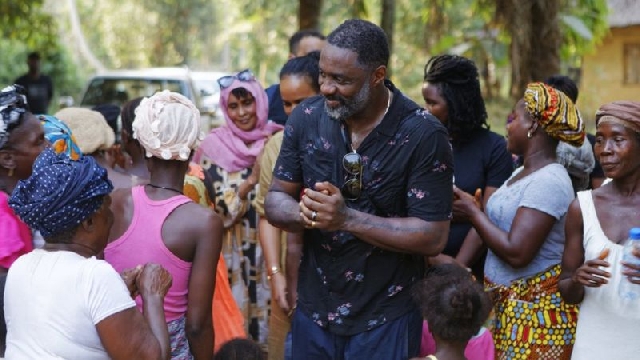 Idris Elba and his wife, Sabrina Dhowre Elba, have said individuals can make a difference in tackling climate change.

The couple were speaking to Liz Bonnin for BBC Radio 5 Live's new podcast 'What Planet Are We On?'

Actor, producer and DJ, Idris said: "There is definitely something that we can all do. You are doing it now listening to this. There is hope."

Sabrina, who is a model and actress, added: "There is a method, there are steps.

"It isn't just throw your hands in the air and go 'the world is on fire'.

"There are solutions and it's figuring out what those solutions are and how we can each play a part because we do know that every person can make a difference.

"It is so easy to feel hopeless when you do hear all of that scaremongering but people can make a change. Each individual person."

Climate change is often seen as a problem that's so big, it needs to be tackled at the level of world governments. But the couple say every person can play a role.

The 10-part podcast explores issues and solutions around climate change. The couple feature in an episode which looks at the impact of climate change on our global food systems.

Idris said he wanted to use his platform to "shine a light" on those most affected by global warming.

"There's no shortage of voices talking about climate change and the green debate," he said, "but there's not much visibility on the people that haven't much at all and still suffer climate change.

"We look at small farmers as slightly unrelated to us, somewhere in the Sahara, but that food chain links to all of us.

"The effect is not apparent now, but it will be massively."

Sabrina and Idris are ambassadors for the UN's International Fund for Agricultural Development (IFAD).

Some of IFAD's projects aim to make food production more resilient to the impacts of climate change. They are piloting climate adaption technologies such as rainwater harvesting and supplementary irrigation.

Sabrina said she and Idris had a strong passion for taking care of the planet for the coming generations.

"We've just got married. I want to have children one day and bring them into a world which I don't think will be destroyed in the coming years," she said.

That sense of responsibility has led them to look for programmes which help people in Africa who are affected by climate change. Last year, they went to Sierra Leone to meet farmers affected by the Ebola epidemic.

"These farmers are probably the least contributors to the climate change problem but are yet being affected the most," said Sabrina.

"This demand, which we saw go up with the pandemic, has always been an almost unreal demand. Food waste is no secret issue in the West and in the North".

Speaking of how he would like to see the world change, Idris said: "My son is six years old and I want him to know Daddy went to Sierra Leone to look at agriculture. 'What's agriculture, Daddy?' Well it's a way of growing food. It's a way of looking after our world. And if we look after our world, it will supply us back.

"And that is something we should leave with the next generation. Even if it's just not that everyone is going to be a great farmer but it's the understanding of the food chain and food supply. That is really important."