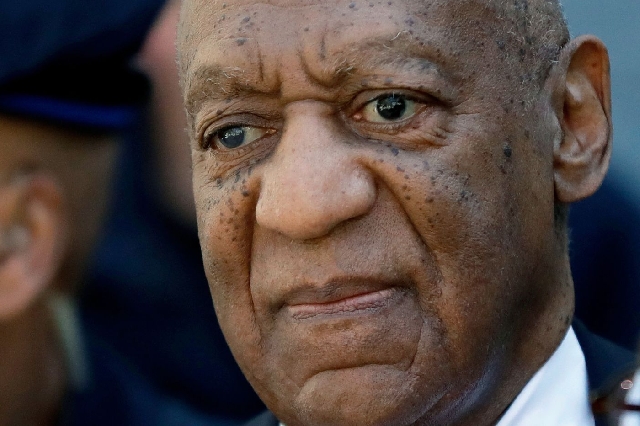 Over a year after he was first incarcerated for the sexual assault of Andrea Constand, the disgraced actor and comedian — who is serving three to 10 years — has given his first interview. In it, the 82-year-old maintained his innocence from his Pennsylvania correctional institution, Phoenix, which is located outside Philadelphia, and, because of that, he expects to serve the entire sentence. Cosby also called his trial a “set up” and the jurors “imposters.”

“I have eight years and nine months left,” Cosby told National Newspaper Publishers Association's BlackPressUSA.com, clearly not believing he will leave prison on the early side of his sentence. “When I come up for parole, they’re not going to hear me say that I have remorse. I was there. I don’t care what group of people come along and talk about this when they weren’t there. They don’t know.”

Cosby, who is appealing his sentence, said his trial was “all a setup. That whole jury thing. They were imposters.”

Cosby referred to an incident after the jury was selected when an alternate juror claimed to have overheard a seated juror say that Cosby was guilty. While the issue was raised by Cosby’s legal team with the judge, that judge apparently found insufficient evidence of it because the juror remained.

“It’s something attorneys will tell you is called a payoff,” Cosby said.

He tied his sentence to racial injustice, saying, “I know what they’ve done to my people. But my people are going to view me and say, ‘That boy looks good. That boy is strong.’ I have too many heroes that I’ve sat with. Too many heroes whom I listened to like John Henrik Clarke, Kenneth Clark, and Dorothy Height. Those people are very strong, and they saw the rejection of their people. This is political. I can see the whole thing.” (He previously compared himself to political prisoners including Martin Luther King Jr., Gandhi and Nelson Mandela.)

But Cosby — who is in general population with prisoners who serve as his helpers, due to his age and being legally blind — called himself a “privileged man in prison.” He also called his small cell his “penthouse.”

The interview took place over several phone calls and Cosby’s spokesperson, Andrew Wyatt, on the line for each one. A Pennsylvania Department of Corrections spokesperson tells Yahoo Entertainment that “reporters are like any other visitor. They need to be on the inmate approved visitor list for an in-person visit, or they can do it via phone,” which is how Cosby’s interview was conducted.

Much of the interview centred on what Cosby says he’s doing to help his fellow black inmates while incarcerated. He said he frequently speaks at the prison reform program Mann Up’s meetings, which are meant to encourage and empower African American inmates. Of course, prior to his conviction Cosby was famously critical of the African-American community — and acknowledged that. He said he probably shouldn’t have given his infamous 2004 “Pound Cake speech,” in which he criticized poor blacks for not living up to the promise of the civil rights movement.

“They are under siege,” he said of African Americans. “This thing with the drugs and the different pockets of the neighbourhoods where it’s going on. When you look at what drugs are doing ... things that make these people drive around and shoot into crowds. The insanity of what is the cause to the brain by all the drugs these people are dealing with. It’s exactly what I warned them about in 2004. They’ve thrown education out the window. They’ve thrown respect for the family out the window, and they’re blaming each other for what’s going on. There is post-traumatic stress syndrome, and there are also bad manners.”

But Cosby said he’s helping his fellow inmates, some of whom went on the record for the interview.

One of the inmates talked about how Cosby enters the lectures “with his fist in the air and all of these men rise up and applaud him.”

Cosby seems to have a lot of pull on the inside. He also claimed he talked one of the inmates into calling off a hit.

“I heard a guy say to someone that if someone did something he didn’t like, he’d go out and get all his boys and they’d kill the fella,” Cosby recalled. “I said, how much sense does that make? You call your boys, and they want to kill him. I said to look at all the people you’ve got involved, and when you get caught, you are all going to jail, and you got one dead fella. ‘Call if off,’ I told the guy. I said to him that you need to call your friends, too.”

Cosby also used the interview as a platform to blame race, not his conviction or the accusations of sexual misconduct by 60 some women, for being behind his iconic show The Cosby Show being pulled from the air. He said it was a conspiracy to remove the positive representation of black characters.

“When The Cosby Show came on with the Huxtables, just think about it. While it was running, other networks and even the media were doing jobs on trying to belittle whatever it represented,” Cosby said.“They did not like what The Cosby Show looked like for us, and many of us traded into it. Now, look at what has happened. They’ve taken everything that I’ve done and swept it into a place where it would not be shown.”

In April 2018, Cosby was convicted of three counts of aggravated indecent assault, for drugging and sexually assaulting Temple University employee Constand in 2004. In September of that year, he was sentenced to three to 10 years in prison with the judge ruling that the TV star is a  “sexually violent predator.” He was taken into custody immediately. In June, he appealed his conviction.