Will the coronavirus change the way we watch films? The closure of cinemas across the US and China has forced film studios to rethink the way they screen movies.

During the peak of the outbreak in China, one major movie went straight to an online platform and was seen by more than half a billion viewers.

US film studios could follow suit and are already launching movies online at the same time as theatre releases.

The industry is facing losses of up to $15bn (£13bn) this year due to the pandemic, according to one expert.

The US and China are the world's biggest movie-watching markets, based on box office sales. Both countries have seen severe disruptions from the coronavirus with widespread closures of cinemas.

China has around 60,000 movie theatres spread across the country, which closed in early January. The timing hit the film industry hard as it came just before Chinese New Year holidays, which normally see $2bn in sales at the box office.

One big film, Lost in Russia, went directly to a streaming site and clocked up in excess of 600m views, according to Chinese media reports. It was available for free from Chinese tech giant ByteDance via two of its streaming platforms.

So far this year worldwide box office sales are estimated to have fallen by at least $5bn, according to industry analysts, with roughly 50% of that drop in China's market alone. "We will see that global number escalate in the coming weeks as China remains shut down, and we start to see theatres worldwide follow similar closures," said Chris Fenton, author of Feeding the Dragon - Inside the trillion-dollar dilemma facing Hollywood, the NBA and American business.

He has estimated the industry will lose $15bn in sales for the year as a whole because of closed cinemas, although this figure could grow depending on how long the pandemic lasts. 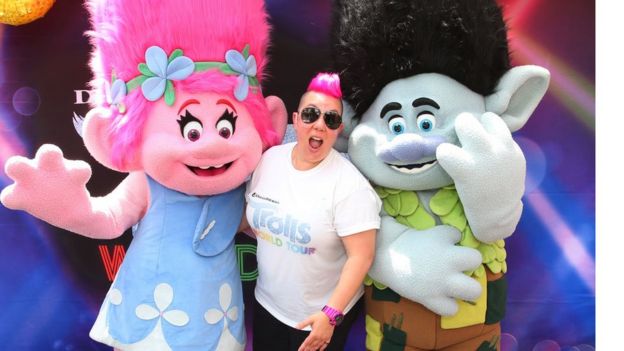 In the US, film studio Universal announced that its three latest cinema releases will be available on streaming platforms while they are still playing in theatres. The release of its latest movie Trolls: World Tour will take place concurrently in US cinemas and online on 10 April.

"The virus outbreak is already changing how studios release films with some movies accelerating their home entertainment release plans," said Gitesh Pandya, editor of BoxOfficeGuru.com. "With almost all US theatres closing down for the foreseeable future, they are looking at what ways they can still generate revenue".

Some film studios have decided to delay film releases until later in the year, including the new James Bond movie, No Time to Die. This week Disney announced further disruption to its entertainment business by delaying the launch of its Marvel movie Black Widow.

Disney's Mulan, a blockbuster film to appeal to a Chinese audience, was due to be released this month but has been delayed along with two other movies. Responding to reports Mulan could premier on the Disney Plus streaming platform instead, a spokesman said: "We truly believe in the movie-going experience".