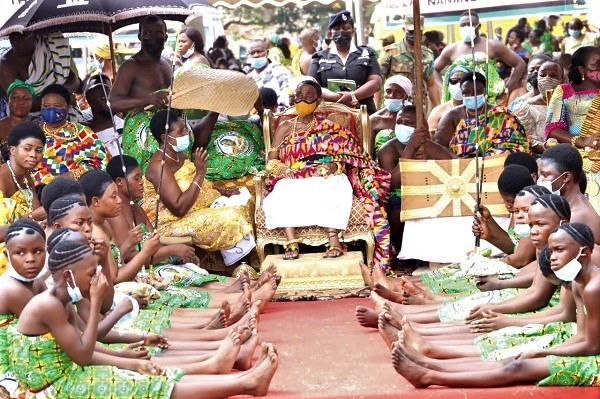 Dwabrem, the ceremonial grounds at the Manhyia Palace in Kumasi, came alive yesterday when the Asantehemaa, Nana Ama Konadu Yiadom III, marked the fifth anniversary of her enstoolment with a durbar.

The grand durbar was attended by a large gathering including the Vice-President, Dr Mahamudu Bawumia, and Asantehene Otumfuo Osei Tutu II.

The colourful event brought out the best in Asante culture and tradition.

The commemoration, which was on the theme: “The role of the contemporary queen mother”, was also attended by representatives of political parties, some members of the Diplomatic Corps and captains of industry.

Being her day, the Asantehemaa, resplendent in beautiful Kente, arrived at Dwabrem in a palanquin, with the Asante Royal colours of yellow, black and green surrounding her.

Her retinue included a young maiden with a special hairstyle and adorned in the anniversary cloth.

The arrival of the Asantehene was preceded by a large army of paramount chiefs, sub-chiefs, palace guards and horn blowers.

Attired in a colourful Kente cloth, the Asantehene made the trip from his palace to the durbar ground, which was awash in different types of kente, on foot.

In a speech, Dr Bawumia eulogised queen mothers and singled out the Asantehemaa for her sterling leadership in bringing stability to the chieftaincy institution in the Ashanti Region.

He said Nana Konadu Yiadom had united all the queen mothers and women in the region to pursue a common agenda.

Dr Bawumia said the region owed its stability in the chieftaincy institution to the wise counselling and the formidable role played by the Asantehemaa.

He indicated that the fifth anniversary was worth celebrating.

According to him, the role of queen mothers in nominating or appointing heirs to stools and also advising chiefs on matters concerning the welfare of the people placed them in a very powerful position.

Notwithstanding the power they wielded, he said, they always discharged their duties without attracting attention to themselves.

Addressing the gathering, Otumfuo Osei Tutu said queen mothers played a very important role in the administration of the Asante Kingdom and the stability of the chieftaincy institution.

He said but for the role played by queen mothers during the colonial days, the Asante Kingdom would have disintegrated by now.

He paid glorious tribute to the celebrated Nana Yaa Asantewaa, the Ejisuhemaa, who led the Asante army in the Anglo-Asante war of 1900.