I’m a beneficiary of your wise counsel – Mahama to Dormaahene 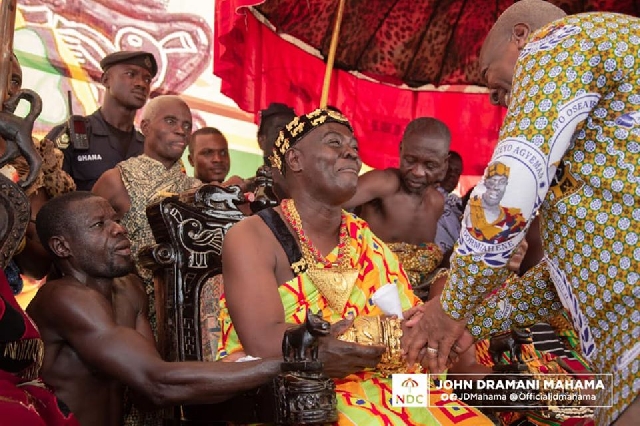 The flag bearer of the main opposition National Democratic Congress (NDC), Mr John Dramani Mahama, has showered praises on the paramount chief of the Dormaa traditional area, Osagyefo Oseadeeyo Agyemang Badu II, as he marks 20 years on the stool.

According to Mr Mahama, not only has the Dormaahene brought peace and development to the Bono Region but he [Mahama] has been a beneficiary to his [Osagyefo Oseadeeyo Agyemang Badu II] wise counsel when he was president.

Mr Mahama said this when he participated in a colourful durbar held in Dormaa to celebrate the 20th anniversary of the enstoolment of Osagyefo Oseadeeyo Agyemang Badu II as Dormaahene on Saturday, 22 December 2019.

Mr Mahama commended Osagyefo Agyeman Badu II, not only for continuing the legacies of his predecessor to bring peace and development to Dormaa but also, for his contributions towards development of the Bono region as a whole.

Osagyefo Oseadeeyo Agyemang Badu II has been able to maintain peace and stability in the Dormaa state. Among chieftaincy disputes he has settled includes one at Dormaa Akwamu, Aboabo Number 4, Nsuhia and Chiraa.

He instituted the Dormaaman Educational Endowment Fund (DOMEF) which has supported about 4,000 people with bursaries and scholarships.

The Dormaahene strongly believes in protecting Ghana’s forests. He has planted a lot of timber species and placed an embargo on mining, whether small scale or large scale in his traditional area.

In the area of sports, the Dormaahene, in conjunction with the district assembly, has constructed a 6,000- capacity stadium at Dormaa Ahenkro, which serves as the home ground of Aduana Stars FC, a premier division team belonging to the traditional council.