Let’s be proud of our tradition - Lafaa chief to Gas 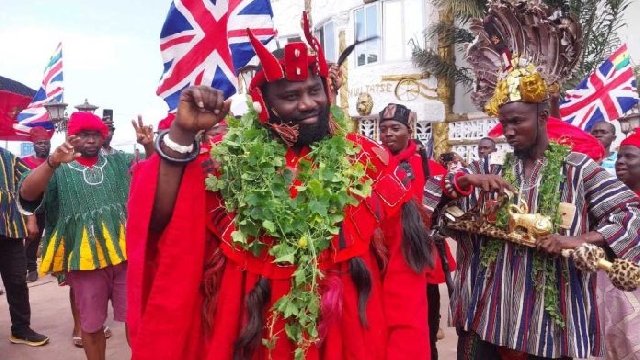 Chief Ngleshie Alata Lafaa-Barima Nmarko under the James Town paramount stool in the Greater Accra Region has bemoaned the rising disinterest of the Ga people in the annual activities to mark the celebration of the Homowo festival.

"The people’s disinterest in the festival is eroding the rich tradition and culture of the people in the region," he worried.

Nii Ayi Okufobour, Chief of Lafaa in the Weija-Gbawe municipality expressed this worry in an interview with the media after sprinkling the traditional 'Kpokpoi' food to climax this year’s Homowo festival on Saturday, September 2, 2022.

He said: "If the people are proud of their tradition nobody can obliterate it but here in the case of the Ga State, indigenes shy from associating with their tradition."

He maintained that because their colleague Asantes in the Ashanti Region are proud of their culture, even sub-chiefs can get up in this day and age and ban a native from entering the Manhyia palace and nobody raises a finger.

"It is all because as Asantes they are proud of their culture and tradition," he continued.

"They will go to all lengths to have their culture and tradition protected," he argued.

"Not even the police have written to the Asante chiefs questioning them on why they took that decision but let a chief from this region do same, you will see the police getting busy all because as people we are not proud of our tradition," he said.

"We have allowed non-indigenes to infiltrate our rank and file all in the name of Accra is the capital city," he bemoaned.

The chief reprimanded the police administration to show some modicum of respect to traditional authorities in the Ga State.

He further called on the Ga people to show massive support for all activities to celebrate and mark Howomo since it was the only lexicon the forebear of the Ga state bequeathed to the region.

The chief who is also the Asafoatse (warlord) of the Weija stool appealed to chiefs to make the interest of their people paramount to rally them for development.