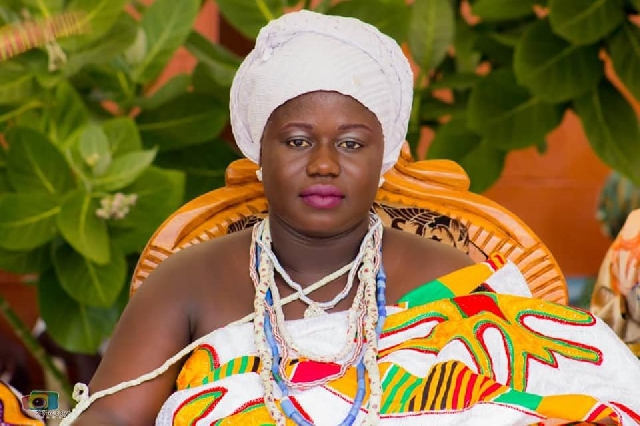 The Kwame Nguah royal family of Manya Krobo has described the destoolment of Nana Aplam II by the Odumase Council as “baseless and logically flawed”.

According to the royal family, no destoolment rituals have been performed for Nana Aplam II, as has been erroneously put out by the Odumase Council, and therefore, no one can claim that Nana Aplam II has been destooled.

The family has, therefore, cautioned the Odumase Council to desist from putting the good name of Manya Krobo, the family and, in particular, the name of Nana Aplam II into disrepute.

The statement advised the public to disregard the said allegations and press statement issued by the Odumase Council with all the contempt it deserves as Nana Aplam II remains the Paramount Queen of the Manya Krobo traditional area.

They also threatened to drag the Konor to The Hague to seek redress if the paramount chief does not rescind his decision in seven days starting from Friday, 22 May 2020.

The reasons for the Konor’s destoolment of the queen mother have not been made public but the Daily Guide reported that its sources intimated that Nana Aplam II courted the ire of the paramount chief when she married a lawyer from a Division with which he has problems, thus, felt betrayed.

Her new husband, according to Daily Guide, hails from the Manya Division headed by the Divisional Chief of the area, Okpatakpla Nene Sasraku IV.

He, together with five other Divisional Chiefs, in October 2019, declared their autonomy from Nene Sakite II and elevated all the six Divisional Stools to paramountcies without the approval of Nene Sakite who is the Overlord of the Manya Krobo State.

Speaking to Class News’ regional correspondent on the alleged destoolment of Nana Aplam II, one of the queen mothers, Manye Ami Bodor II from the Manya Akomoase clan, said: “We slept one day and woke up and it was in the air that he has destooled our queen mother. He didn’t give us any reason. We only heard it on the airwaves, on the internet and social media”.

“We are calling on him, we are begging him, he is our chief. All that the Manya Krobo Queen Mothers Association, what we are telling him is he should reinstate our queen mother for us. We don’t have any problem with her. He should reinstate her because he didn’t give us any reason.

“Even if you are working with your junior ranks and somebody does something that is not good, at least, you’ll query the person and the person will give you an answer.

“Even murderers, when they go to court, they are given the opportunity to explain themselves”, Manye Ami Bodor II said, adding: “We are begging him, we are on our knees, we are speaking with one voice. All that we are telling him [is that] he should reinstate our queen mother for us. We don’t have any problem with her because we have not seen anything wrong. All the charges he’s levelling against her are not true. The queen mother is rather uniting us”.

She said the queen mothers are ready and willing to go the long haul in seeking redress for their queen mother.

“We are telling him and promising him that if need be, we’ll pursue this matter in The Hague. We would do it. As to our source of funding, he should leave it to us. We are calling on all women groups in Ghana to come and help us. WiLDAF, whatever, to come to our aid”.

The queen mothers also made a passionate appeal to the President to intervene in the matter.

“We are calling on our President, President Nana Addo, we are begging him that he should call our chief to order. … We don’t want to come to the media anymore”, she said.

Directing her anger at the Konor, Manye Ami Bodor II quizzed: “… If she were your daughter in her present state, would you do this thing to her? We will not give you the chance. We will go after you Nene Sackite II. My name is Manye Ami Bodor. If you don’t reinstate her for us, we’ve given you seven days and it starts from now; if we don’t hear from you, you’ll hear from us big time”.

“We will go after you”, she warned the Konor.

Another queen mother, Manye Narkie Gorme, said: “I’m surprised and I’m even short of words because one, I thought if you should be living with the father and then maybe your wife or your daughter or your sister should do something, I think you should alert the person; you should let the person know what is going on or what she has done but we don’t even know what’s going on, we don’t even know what the lady has done, and we are surprised of what is happening”.