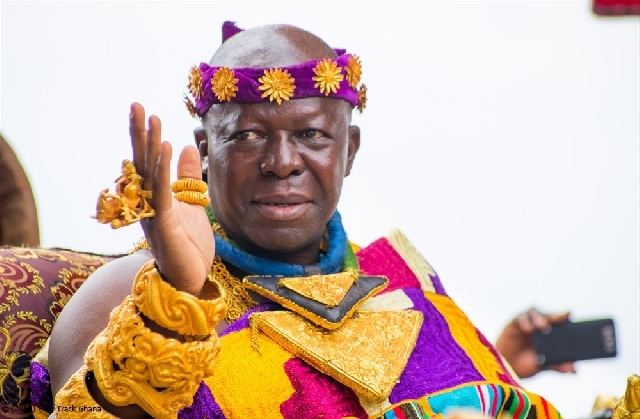 Asantehene Otumfuo Osei Tutu II has charged the Inspector-General of Police (IGP), Mr James Oppong-Boanuh, and the entire police administration to tackle serious incidents that threaten the peace and stability of the country.

Citing the recent murder of Mfantseman MP Ekow Hayford by armed robbers, the Asantehene expressed worry about the rate at which civilians have access to arms that are used to commit crime.

“Since you are here, I want to talk about the rampant killings on our highways, of which some MPs have even been affected. People are not comfortable with that. This has created fear and panic among the populace. They [armed robbers] at times block roads and rob people of their belongings.

“But I know that with the training you’ve received, if you decide to investigate to get to the bottom of any issue, you will be able to do that.

“You should, therefore, do that for Ghanaians to have confidence in the police institution.

“I read in the newspapers that there has been a proliferation of small arms among the populace. Why should it be so?

“If it happens that those of us you are supposed to protect are rather acquiring arms, then it means they have lost confidence in you.

“You have to critically look at that. You have to do your work well to ensure peace in the country,” Otumfuo said.

The Asantehene gave the admonishment when the IGP paid a courtesy call on him at the Manhyia palace, as part of his one-day tour of the Ashanti Region.

He, therefore, called on the police administration to expedite action in investigating criminal cases so that the general public will repose confidence in them.

The IGP expressed the police administration’s resolve in addressing such issues.

During his tour, the police undertook a simulation exercise to demonstrate their readiness to handle incidents that may arise, before, during and after the election.

The Asantehene further cautioned the youth against deception from politicians to foment trouble in the elections.

Ahead of the general elections in December, Mr Oppong-Boanuh said the Ghana Police Service has put in place adequate security measures to ensure a smooth and peaceful electoral process.

The IGP warned that the police will deal severely with persons who may foment trouble in the December polls.

He also indicated the necessary logistics have been provided to ensure the security of Ghanaians and a smooth electoral process.