7 Ways to spark conversation with your longtime crush 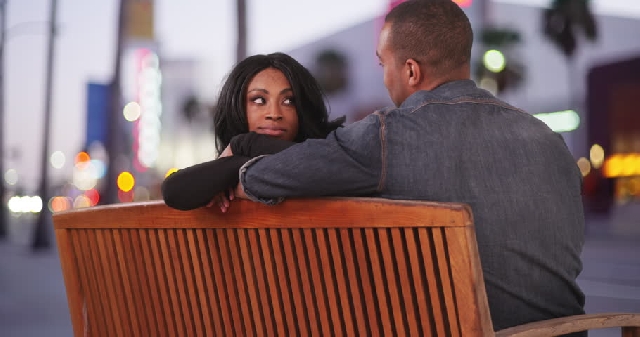 Give him a compliment

Is there someone you’ve continuously thought about and been watching over the years? We promise if you wait another day, some lucky woman will have slid in his DMs and poof…he’s off the market. Now is the time to take control, rise up and go get your man! As certified relationship coaches and professional matchmakers, we coach our clients on creating their own opportunities. Long gone are the days where we sit back with our legs crossed at the ankles and our chin in the air expecting him to come sweep us off our feet. Many of us were taught by our parents and their parents that women never make the first move, but how’s that working for you? Its time to try something different. Stop sitting on the sideline watching him and get yourself in the game, girlfriend! Here are a few examples of how you can jumpstart the conversation and turn your longtime crush into your real-life bae.

The old college or high school sweetheart – Remember back in the day when you thought he wasn’t popular enough in school? He appeared to be the nerdy guy, not the jock or the heartthrob everyone wanted. Fast forward 2019, he’s running his own business or producing hit sitcoms. How many times can you kick yourself now?  Well, he’s recently single and its time to take your shot. Here’s how to stage this:

Slide into his DM and let him know how proud you are of his accomplishments (men love acknowledgments).

Bring up a funny story that reminded you of him.

Ask if they’re up for a phone chat?

The single parent you’ve been eyeing – You’ve watched this dad drop his children off at school, show up at games. He’s the only one at the parent-teacher conference and he’s never worn a wedding ring. Here’s how to stage this:

Mention how much you’ve admired his involvement.

Ask an open-ended question like, “So how are you enjoying living in this area?”

Respond with some things you and your family like to do there also.

Let him know how much you’ve enjoyed chatting with him and you’d love to continue the conversation later.

Exchange numbers and send a text letting him know it was great talking to him and you look forward to hearing his voice later.

Your neighbour – You’ve seen him walk in and out of his home alone and you’ve never said a word. Well now it’s time to smile and say hello. Here’s how to stage this:

Spend more time outside (take an afternoon or evening walk, put a chair outside in nice weather with a book, walk your dog if you have one) to allow you to be in the same space

Smile and greet him.

Give him a compliment.

Ask him for help of some sort (would you mind carrying this box to my door?)

“Do you have a wife or girlfriend? I’d love to meet her too.”

If no, “I’d love to get to know you better when we have more time.  Maybe we can meet for a drink sometime soon.”

Someone you’ve put in the friend zone – This is probably someone you initially didn’t have butterflies for, but now you’re taking a second look. Typically, this happens after they land someone cute or we see one of their accomplishments on social media (no judgment from us!) He’s been into you forever, but it’s time to let him know the feeling is mutual. Better late than never. Here’s how to stage this:

Call him and say “Hey you! I was just thinking about you and found myself laughing at that time__________. I wanted to call you and say hello.”

“What are you up to these days?”

Your girlfriend’s brother – You’ve always thought her brother was attractive, and the two of you have flirted over the years. You thought he was off-limits because after all, he was like family. Now that all of you are all grown up, the dynamics have changed. Well, now it’s time to have that uncomfortable conversation with your girlfriend. Let’s face it – we’re all grown. Here’s how to stage this:

Hey girl, we’ve been friends for years and I’ve always thought your brother was attractive and a super nice guy. How would you feel if we had a conversation to see if there was any interest? You’re my friend so I wanted to have a conversation with you first before I reached out to him.  What’s he up to now?

Great well I’m going to send him a note on social media just to say hello and see what happens.

Your Co-worker – So you work at a big company and you keep seeing this amazing guy cross your path in the hallways at work.  He must be either new or in a different department but Wow.  You both smile and say hello every time and it’s time to make a move,  Now that you’re being intentional, you first need to be ready every day with cute clothes and a neat appearance so you feel super confident to start a conversation when the opportunity comes. Ready? Here’s how to stage this:

You go back to the water cooler at the same time of day and here he comes again just like clockwork.

“Hey there, how are you today?”

“How long have you been working here?”

“It was so nice meeting you. Looking forward to it!”

Your girlfriend’s husband’s friend – So you and your best girlfriend are together often and now that she’s married, you notice that one of her husband’s friends is not FINE but FOYNEE!  That smile and him in those sweats as they watch the game on the weekends is making you melt. Time to make it happen ladies!

Get your girlfriend in on the plan and see when he’s coming over next so you can be there.

Strike up a conversation like, “Hey there, I’ve seen you over here but I’ve never had a chance to say hello.”

“Where did you and (insert husband’s name) meet?”

“Nice. Well, don’t be a stranger. I’d love to get to know you better too outside of them. Maybe we can exchange numbers and keep in touch.”

There’s so much more where this came from, but you get the gist. So often there are great men right under our nose that have either been counted out or no traction has been made because they have no idea you’re interested. What are you waiting for?  We are in the era of taking command of our destiny and dating with intention. Who knows, you could be laughing on the phone for hours or out on a date with him within the next few days.