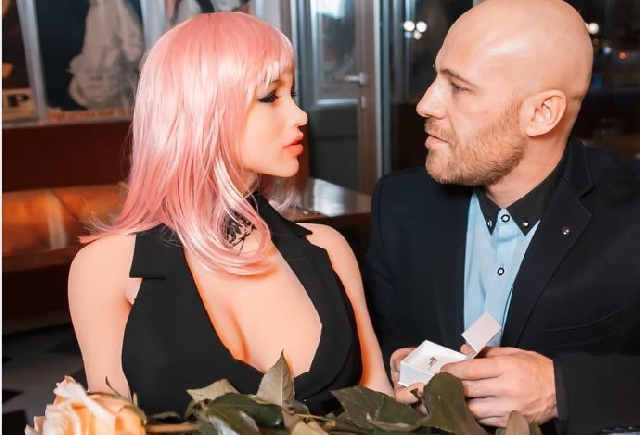 Actor and bodybuilder Yuri Tolochko has popped the big question to his girlfriend, Margo. It was a pretty traditional proposal; he presented her with roses and got down on one knee during a romantic dinner while a saxophonist serenaded the couple.

Margo, who happens to be a life-size sex doll, just shared the happy news with her 63,000 Instagram followers. (And by shared, we, of course, mean..." shared.")

The post was accompanied by a lengthy caption, in which Tolochko—who maintains Margo's social media—outlines his opinion on the ideal relationship between a man and a woman. A translated portion reads: "Woman! If you are reading this text now. Go to your man, grab a cold beer and while he drinks, quickly makes him pleased for all the suffering that women brought in his life... Scratch his back there, praise his mother, say that he has a big... Mind, honour, and conscience." Truly mind-blowing that a man who just announced his impending nuptials to a sex doll might have such ideas.

Prior to the proposal, Tolochko gifted Margo with cosmetic surgery, in order to alleviate the insecurity he claims she felt about her appearance. "She began to develop a complex," Tolochko recently told the New York Post. "When I presented her photo to the world, there was a lot of criticism and she began to develop a complex, so we decided to have plastic surgery... She has changed a lot. At first, it was hard to accept but I got used to it later on."

Tolochko and Margo have been an item for eight months, ever since Tolochko "rescued" her from another man with less than honourable intentions in a bar. And while theirs is pretty unconventional as love stories go, Tolochko and Margo aren't alone.

Over the last few men, a growing number of men have shared how they fell in love with their sex dolls and pursued lasting relationships with them. One Spanish engineer even created a doll with a "family" mode so that his creation, a doll named Samantha, could better fulfil the user's notion of domestic bliss.