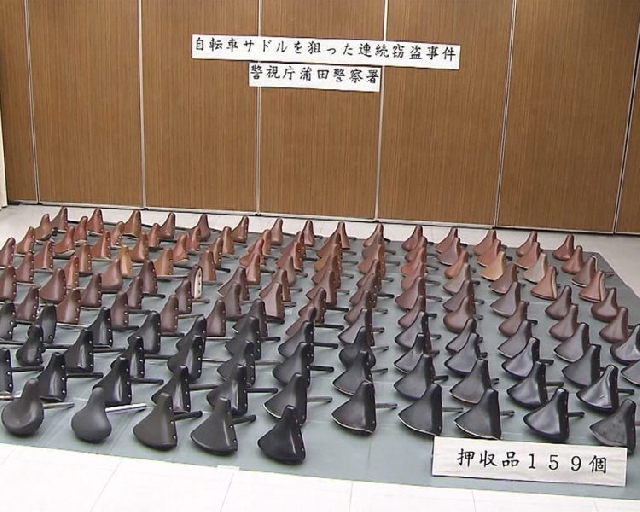 A 61-year-old man from Tokyo’s Ota Ward was recently arrested by Japanese police for allegedly stealing no less than 159 bicycle seats, as a bizarre way of taking revenge for having his own seat stolen last year.

Earlier this month, Akio Hatori was apprehended for the alleged theft of a bicycle seat on August 29. Surveillance camera footage showed him casually removing the seat of someone’s bike, placing it in the basket of his own bicycle and pedalling away. Unfortunately for him, the victim called the police and they started investigating the minor theft. However, when officers identified Hatori and raided his house last week, they only expected to find the one seat, not a stash of 159 of them.

The story of how the old man came into the possession of such a large collection of bicycle seat is even more bizarre. Apparently, the 61-year-old man had his own bike saddle stolen in the summer of 2018 and was so disappointed that he wanted other people to feel his pain. So instead of reporting the theft or at least trying to identify the thief so he could exact revenge on them, Hatori turned into a serial bicycle seat thief himself.

“I had to buy another bicycle seat after mine was stolen in the summer of 2018,” Akio Hatori told police. “After that I started stealing out of revenge. I wanted others to know the feeling.”

After opening an investigation into Akio Hatori’s petty crime spree, police uncovered surveillance videos of him swiping bike seats and pedalling through Tokyo with them piled in his bicycle basket. He managed to amass a collection of 159 seats in his home, which police officers arranged neatly and showcased to the media.

A trial date for Hatori is yet to be set.