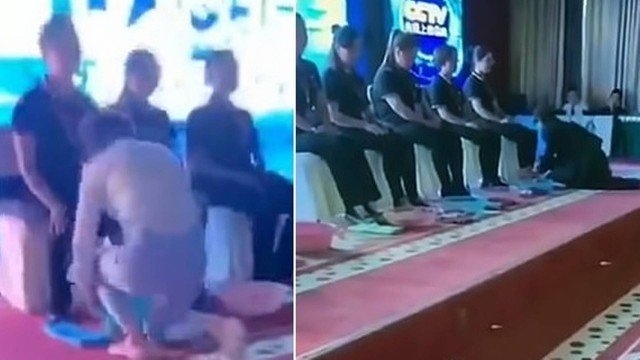 Two executives of a cosmetic company in China recently drew praise for an unusual way of thanking their staff for their loyalty and hard work – getting on their feet and washing the feet of their most hard-working employees.

Chinese bosses are notorious for subjecting their employees to arduous and horrific punishments for not reaching company sales goals – like making them crawl on all fours in public or eat cockroaches – but the heads of an unnamed cosmetics company in Jinan, China’s Shandong Province, recently proved that they are capable of exceptional display of gratitude. In a viral video that has been doing the rounds online this week, the two female executives can be seen getting down on their needs and washing employees’ feet.

The unusual ceremony reportedly took place on November 2nd, at the headquarters of a company that specializes in selling cosmetic products. In the short video, the two executives can be seen walking down an aisle, putting their hands together and bowing towards a stage, where eight employees are seated, behind small basins of water. They then proceed to move towards the stage, get down on their knees, remove the shoes from their employees’ feet and wash them by hand.

The act of washing the feet of their best-performing employees was reportedly meant to show management’s gratitude for their hard work, but also boost employee morale. However, while some people commended the display of gratitude, others dismissed it as fake or just disgusting.

“The boss is so cunning. Washing feet for employees means they cannot ask for financial rewards,” one person wrote on Weibo, China’s version of Twitter.

“Who invented such a low-class stunt that is to wash the other’s feet in broad daylight? And who would find it interesting?” another one commented.

This isn’t the first time that Chinese bosses chose to wash their employees’ feet in public to show their gratitude. Three years ago, bosses in Shenzen did the same thing during an annual meeting.