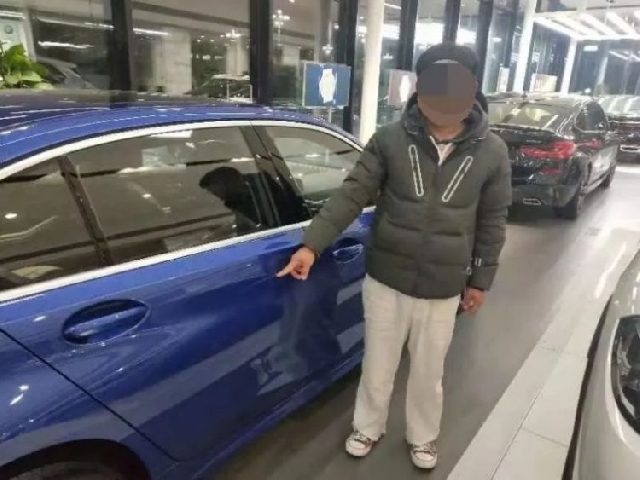 A 22-year-old man was recently accused of scratching a BMW sedan at a dealership in Jiangxi City for a very bizarre reason – so his father would be forced to buy it for him according to the “you break it you buy it” principle.

The suspect, identified as 22-year-old Ji Moubing, reportedly visited the BMW dealership on November 25th and expressed interest in buying a dark blue sedan. Staff later told police that Ji acted normally and actually seemed really excited, telling one salesman that his father had promised to buy him a nice car as a reward for getting his driver’s license. Unfortunately, things took a turn for the worse after Ji called his father to tell him what car he wanted.

It’s unclear what Ji Moubing’s father told him during their short phone conversation, but dealership staff told police that after hanging up his phone, the 22-year-old went into a rage, grabbed a pair of car keys and proceeded to make a long, deep scratch on the back of the sedan he seemed to like so much, before anyone could stop him.

A showroom salesman called police immediately after Ji’s reckless gesture, and officers confirmed that he was the perpetrator by checking CCTV camera footage. In his defence, the spoiled youth said that his father had told him he wouldn’t buy the BMW sedan for him, so he scratched it so his parent would have no choice but to pay for it. Talk about a spoiled brat…

What Ji failed to factor into the equation was his arrest for purposely damaging the dealership’s property. The case is still under investigation and it’s unclear whether Ji’s father eventually bought the car to get his son off the hook.

“He’s like a little kid asking for a gift from his parents. He believed if he damaged the car, his father would buy it for him,” Chen Junnan, a local police officer told Pear Video.