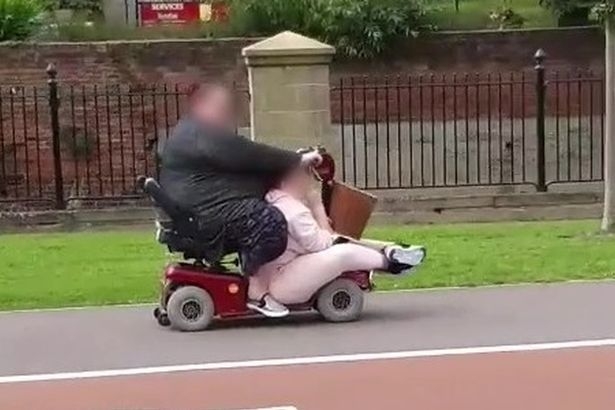 Two women spotted on a mobility scooter together

Two women managed to squeeze onto a single small mobility scooter and cruise into town.

Video footage shows a woman on the seat and driving the vehicle, while a second passenger wearing a pink tracksuit sits on the base with her feet sticking out of the front to save room.

The scooter seemed to speed along normally despite the extra weight.

It's thought the pair were trying to avoid walking into town and they seemed undeterred by the unusual seating arrangement.

Andrew Hunter spotted the strange sight as he made his way between jobs and filmed the nonplussed pair relaxing on the scooter as they cruised along the pavement last month.

The 27-year-old shared the video online where it was liked, shared and commented on more than 3,750 times, racking up almost 200,000 views.

Andrew, who is a scaffolder, found the sight hilarious but claims most people who have watched the video are shocked.

Andrew, from Darlington, County Durham, said: "I did a double-take because I couldn't really believe what I was seeing.

"I thought it was so unusual and really funny.

"I don't know the two people in this video. I was on my way between jobs and was sat in my work van when I looked over and saw the two women.

"One was sat on the seat and the other had her legs around the handle stand with her feet sticking out in front of the scooter.

“I think the two women were off to the town centre, I presume to do a bit of shopping.

"Most people who have seen the video were quite shocked that they could both fit on, but also thought the sight of two women squeezed onto one small scooter was funny."

Many commenting suggested the duo were being 'lazy' and were shocked they could fit on one scooter.