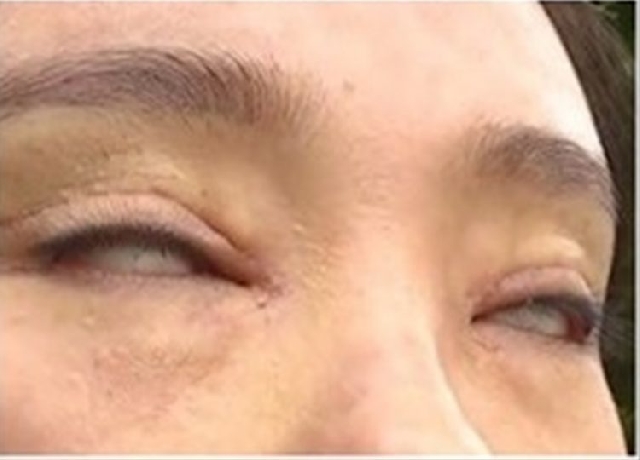 A Chinese woman who spent 13,000 yuan ($1,850) on cosmetic double eyelid surgery has become unable to fully close her eyes, even when she sleeps.

Around 50 of Asians are born without a visible eyelid crease above their lash line, which basically means they have what is called a “monolid”. In 1896, to address this aesthetic issue, Japanese surgeon Mikamo developed a procedure called blepharoplasty or double eyelid surgery, which has since been performed millions of times. It’s the most requested plastic surgery in Asia, and in countries like South Korea, it’s been normalized as a way of becoming more attractive. But while the results of double eyelid surgery can indeed be visually appealing, in some cases it can have some really nasty consequences, like leaving patients unable to fully close their eyes.

Oriental Daily recently reported the case of a Chinese woman surnamed Li who paid 13,000 to get double eyelid surgery and epicanthus corrective surgery but ended up regretting her decision. She reportedly asked for the procedure in order to make her eyes seem larger, but wasn’t too happy with the results, so she asked the clinic to perform another intervention and make the double eyelid effect more prominent.

Doctors agreed to operate again, but the results of the second surgery failed to please the woman. In fact, her eyelids got even worse, and she noticed that she couldn’t fully close her eyes. The clinic tried explaining that the second operation was very close to the first one, so the scars from both stuck together, which made the patient unable to fully close her eyes.

Representatives of the clinic allegedly told the woman that the side effect was perfectly normal under the circumstances, but that she would be able to again close her eyes all the way once the wounds healed completely. They also offered to perform a third procedure to correct this problem, but the woman reportedly refused, instead requesting compensation.

Claiming that she had to sleep with her eyes half-open and that being unable to fully close her eyes made her vision blurry, Li was able to reach a settlement of 30,000 yuan ($4,200) with the clinic. She now hopes that her eyes will heal in time as doctors said.