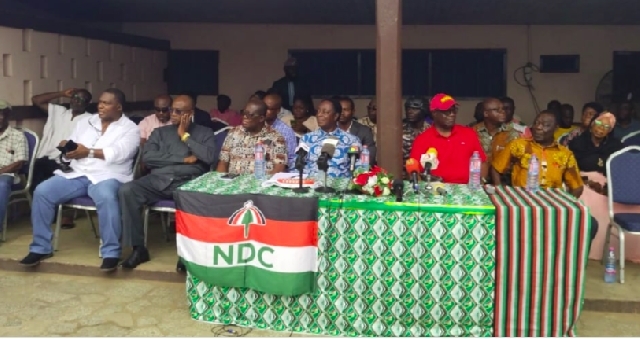 Launch of the Ahotor project

It’s been almost three months since Dr. Kwabena Duffuor, one of NDC’s leading members launched the ahoto project in Ashaiman constituency to bring relief to the grassroots members of the party.

The project which promises to provide GHS30,000 worth of accessories for a rental business in each of all the 275 constituencies has been hailed by the rank and file of the party as a great initiative and a welcoming relief. Ashaiman constituency was the first to benefit from the ahoto project. It sent excitement across the length and breadth of the party structures.

Finally, there is a workable business model that can financially sustain the party base and bring practical benefits and great relief to party members at the base.

As all other constituencies throughout the country longingly await their turn to get ahoto, sections of the party leadership seem bent on stalling the project instead of supporting its smooth take off.

As some of us are hearing, some party national executives want to take over the ahoto project and operate it from the headquarters instead of allowing Dr. Duffuor who initiated the ahoto project to manage the implementation.

It is unbelievable that leaders who are unable to come up with creative ideas to help the party grow are the same ones who make it their duty to destroy any new or creative ideas coming from anyone else apart from them and John Mahama.

Dr. Kwabena Duffuor’s ahoto project is a grassroots empowerment project that has nothing to do with national executives or the centralized party headquarters. They must not be allowed to hijack it. If they have any ideas to support the grassroots, they should come out for the grassroots to appreciate. In any case that is why we voted them into office.

It is a direct response to the plight of constituency executives who have run party activities over the years with their personal resources.  It is therefore selfishly ridiculous for anybody or group of persons within the current crop of national executives to try to derail the ahoto project with all sorts of gimmickry as they have been doing for the past several months.

Indeed, there is no reason for Dr. Duffuor or any member of the NDC who wishes to adopt a constituency to consult with, let alone agree with the national executives who have all constituted themselves into a bunch of sycophantic followers of former President John Mahama. The national executives do not have the interest of the grassroots at heart. If not, why are they misbehaving this way?

These are National executives who are only interested in maintaining Mahama as flag bearer without any regards to the welfare of party members.

People like the arm-chair National Chairman Ofosu Ampofo must be told in his face that the NDC party is not his personal property and the ahoto project belongs to the NDC grassroots and not NDC headquarters.

It is also in the interest of the NDC grassroots to begin to call out these selfish leaders and enemies of progress who cannot see pass their personal political and economic interests. This time, “we no go sit down make they cheat us”.

It is we the base that called for Ahoto because selfish National executives usually keep all resources to themselves at the top.  The NEC or the FEC has no business meddling in the ahoto project as they are trying to do now because the base never meddles in the resources of the national office.

After all, no one has stopped John Mahama from bringing innovative ideas to help the NDC grassroots so why is he and his supporters misconducting themselves this way? Is it because they don’t actually care about we the grassroots and their only interest is in capturing power for the sole benefit of themselves?

Has the NDC become a one-man church? Is it wrong for anyone to help party folks and strengthen the party base? Is the NDC signaling to donors that they’re self-sufficient and does not need support?

And by the way, what has happened to positive defiance as a fundamental bedrock principle of the NDC? Footsoldiers of the great NDC, let us arise and defy the corrupt establishment bent on taking away our ahoto project! Dr. Kwabena Duffuor, we the grassroots are ready for ahoto and we don’t care about the approval or disapproval of the national executives or the former President. Only the grassroots approval is important for the NDC party!