Akufo-Addo’s Cathedral: A Desperate Throw of the Dice! 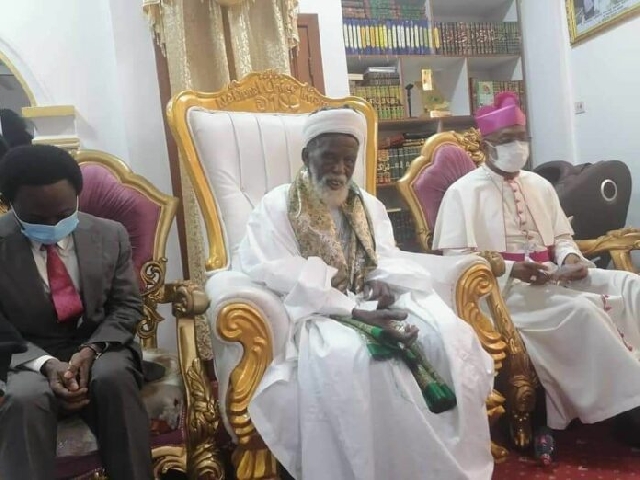 The Chief Imam flanked by some Christian clergy

Let me begin with this observation: When the new mosque at Nima was being constructed – and it spanned many years – no Christian church leader or denomination approached the Islamic community with a donation towards its realization. The Islamic community shouldered its responsibility alone until help stepped from outside to complete it. That is a fact now firmly recorded in our spiritual history. None of the Christian denominations, nor their leaders used the argument of “peaceful coexistence” to step forward to canvass for donations to complete the mosque.

Indeed, some of them, like the charismatics/evangelicals do not even recognize Islam as a religion and Mohammed (PBABH) as a Prophet/Messenger of God (Allah). They argue openly that Muslims would not go to heaven and Jesus Christ (Nabi Issah to Muslims) their Lord and Saviour, is the only true way.

So why all of a sudden this hypocrisy of craving the National Chief Imam’s financial contribution towards the construction of the cathedral? They also overlooked, or were ignorant of the fact that he does not represent all Muslims in doctrinal matters.

In addition, no government, including the present, ever exploited the full power of state and government to raise a pesewa for the mosque as is being done for the cathedral. Now even our national budget makes room for the cathedral and government and state officials are darting about everywhere, at home and abroad to solicit for funds in our name. This is provocation of the highest order…

To have paraded the centenarian National Chief Imam before cameras to make a grovelling “donation” towards the Akufo-Addo cathedral was not only a dishonour to the Islamic leader personally but a sharp slap and disrespect to the entire Ghanaian Muslim community. If the Christian community and leadership saw no virtue in contributing towards the construction of the new mosque, how dare they try to muscle Ghanaian Muslims through the Chief Imam to sponsor a Christocentric political emblem?!

Nana Addo is setting some dangerous precedents and those who should reign him in are rather egging him on. The dismissal of Charlotte Osei, Chairperson of the Electoral Commission; the desecration of our national and African solidarity holidays; the corrupting of our electoral system; the selective prosecution/persecution of political opponents; the injection of religion into our secular political culture and who knows what else is lurking in the shadows?! They have all remained silent.

Because this nonsensical cathedral satisfies a certain Christian hegemony in our body politic, the church leaders, traditional and evangelical, have all rallied behind it, with the courageous exception of the Catholic Church, even if Catholic Archbishop Palmer-Buckle has allowed himself to be complicit in this nugatory caper.

Nana Addo is a cynical politician; he knows how to exploit a situation for his political advantage. This so-called national cathedral has been coldly calculated to exploit Christian gullibility/sensibilities for a political end and he got it spot on!

Christian leaders see it as an advancement of their religion and so feel no pangs of conscience lining up behind it. Nana Addo often speaks of the “majority”, that is, of Christians over other faiths, as justification for his “pledge” to his God, but he should not underrate a passionate and radicalized “minority” whose critical mass could decide the balance between peace and instability in Ghana.

The Ghanaian religious communities are very peace-loving, living peacefully for generations, until now, with this government playing up our religious differences. When Nana Addo’s Rasputin showed disrespect to this same National Chief Imam in one of his religious effusions – inspired by his patronage from this government, some youths mobilized themselves to teach him a lesson, but the magnanimity of the Imam saved him and his church.

The Imam has proved over and again that he is a magnanimous force for good and therefore must not be compromised in partisan political games.

Is it not ironic, but also reckless, that, with all our needs, problems, unfulfilled aspirations and disruptive political partisanship, it is a religious fracas that has been made the focus of our “priorities”? Something has gone wrong – a dislocation. Nothing can justify the Imam’s inclusion into this cathedral lineup. Was it pressure from Nana Akufo-Addo, Dr Alhaji Bawumia, Archbishop Duncan-Williams, Archbishop Palmer-Buckle, the “Old Man’s” own advisors, or some of the “fixers” at Jubilee House? Whoever or whatever it is, bringing the Imam in, was a desperate throw of the dice on an issue that does not enjoy national acceptance.

As I said in a previous commentary, they have sullied the Imam’s reverential standing. The ruse has been roundly condemned with some Muslims accusing him of “haram”. That’s like telling archbishops Palmer-Buckle and Duncan-Williams that they have lost their anointing – which may be pending! And all because of Nana Addo’s ego trip.

It is not only Greeks bearing gifts that you should beware of, but a politician offering a religious gift…And by the way, they want to take “by force” our rosewood seized from smugglers to the cathedral when in fairness, they should be disposed of in a public auction for any Ghanaian interested to buy. That is how to glorify God’s name: fairness, accountability and equity.

After this sordid politico-religious melodrama involving a GhC50,000 “donation”: A Wish, A Hope, A Prayer: That our country would use her democracy and electoral process and freedom of worship wisely to allow the land to flourish for the benefit of all citizens