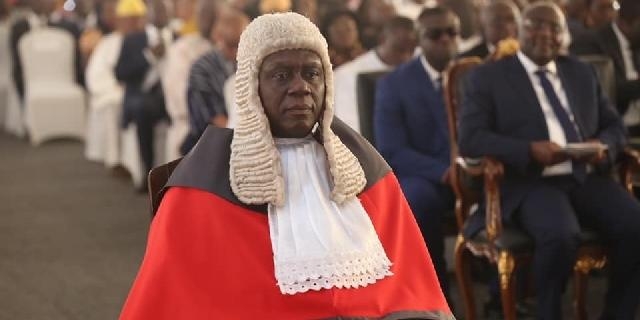 Once again, our judiciary is at the centre of political disputation. Former President Mahama set this off when, in an address to an NDC lawyers' conference, he bemoaned the growing mistrust in the justice system.

He stated that "there is, therefore, an urgent need for the Ghanaian judiciary to work to win the trust and confidence of the citizenry and erase the widely held perception of hostility and political bias in legal proceedings at the highest courts of the land."

He continued later that: "Unfortunately, we have no hope that the current leadership of our judiciary can lead such a process of change."

These comments follow a declaration earlier in the year to the effect that the next election would be a "do or die affair" decided at the polling station and not in the courts.

A few days later, the Attorney General, Godfred Dame responded: "I am compelled to comment on same in this address because they border on the security of the state and constitute a deliberate pattern of conduct aimed at undermining the independence of the judiciary, an arm of government whose autonomy is crucial to its proper functioning." He continued that "such conduct is clearly deplorable."

As if the heat generated was not enough, the President and Chief Justice joined in. Addressing the Ghana Bar Association, the President, H.E. Nana Akufo-Addo declared that: "There are some who have made it their political agenda to disparage systematically the image of the judiciary for selfish and parochial reasons."

Addressing a conference of judges, the Chief Justice, Justice Anin-Yeboah, told judges, "Yours is to dispense justice and to uphold the rule of law irrespective of public clamour".

To begin from the end, the CJ was right. But how do you dispense justice in the midst of clamour when the clamour is due to the actuality or perception that you are biased?

How does a match official for a Hearts-Kotoko match carry on when Kotoko fans are booing him for being a Hearts supporter or vice-versa?

The Attorney General's comments remind one of the very sober comments made by National Security Minister Kan Dapaah some time ago.

As for the President, his comments remind me of the man whose friend accused his wife of being too cosy with his bosom friend. By jumping to the defence of the accused woman, the hapless man only succeeded in deepening the suspicion of an illicit affair!

Former President Mahama raised a concern about our justice system, not just our judiciary. This would include the police, investigative bodies and of course, the courts. The problems, particularly regarding the police and the other parts of our justice system that, together with the failings of the judiciary, mock our motto, "Freedom and Justice" are legion but for the sake of time, I will skip them.

Before addressing the issues raised, let me join all our good citizens in bemoaning the absence of proposals and actions to resolve the obvious crisis of confidence in our judiciary. These comments aforementioned gave us heat, not light.

Beginning with the first Republic, our judiciary has not covered itself with glory at all, except for a few bright moments. It colluded with the Nkrumah regime with illegal deportations and PDA spinelessly. It didn't even cough when Busia unnecessarily put the courts down with his needless "No court" comments in the Sallah case.

It didn't push back as the former AFRC Chairman recklessly threatened retribution if AFRC convicts were freed under Limann. And under the 4th republic, it has been deferential to the executive in many cases. As for the tenure of military regimes, I don't want to start. And aside from politics, it has been too slow, too beholden to the rich and as revealed by Anas and others, too corrupt. This current crisis has been years in the making.

President Mahama diagnoses the problem but is slightly mistaken in thinking that the judiciary itself, alone, can address it. It can't.

To solve this problem, we must go to the roots.

A judge is a lawyer who knows the President and when the President is a lawyer, he knows many lawyers!! And he will appoint many Supreme Court justices if there is no limit on how many he can appoint. Former US Supreme Court Justice Antonin Scalia opined that judges should have 3 qualities--adherence to the law, scholarship and an even-handed demeanour.

The last one, he explained meant "the judge must conduct himself/herself and his court in a way that inspires public confidence in the PROCESS by which the decision was reached."

I suggest that our judges must take a hard look at themselves and find out how their conduct has reduced political and public confidence in them.

Furthermore,  Parliament must reform the Judiciary, along the lines of the Judicial Act passed in the US in the early days of the American republic. It must set an upper limit on the number of judges on the Supreme Court and define the appellate process while setting time limits on how long cases stay in the court system. What happened to "Justice delayed is justice denied"?

The Speaker and others shouldn't abandon the Ghana Bar Association and our judiciary. They must fight to reform them.

I miss the days when the Ghana Bar Association was a leading voice and the moral conscience of our country. This was exemplified by their admirable boycott of the courts in protest against the imprisonment of a lawyer for contempt in 1995. I have wondered whether the Peace Council and Council of State still exist. Are they waiting for the next disputed elections to plead with political leaders to accept the legitimacy of the courts?

Finally, the NPP has lost its moral standing. That party has been responsible for so many advances in our constitutional journey, from fighting for more transparent elections to opposing the celebration of 31st December etc. The arc of history would have dictated that under the Presidency of a famed Human Rights lawyer, the Party of Danquah who died so painfully in prison because of the rule of man-- not of law would be so diligent in defence of our constitution and our laws.

But that hasn't been the case.

Today, at least nominally, the party of Rawlings appears more concerned about judicial independence and conduct than the party of lawyers da Rocha, Kufuor and Akufo-Addo!

Let citizens stand in defence of the rule of law!

Long live the rule of law!