Be truthful and fair to graduands 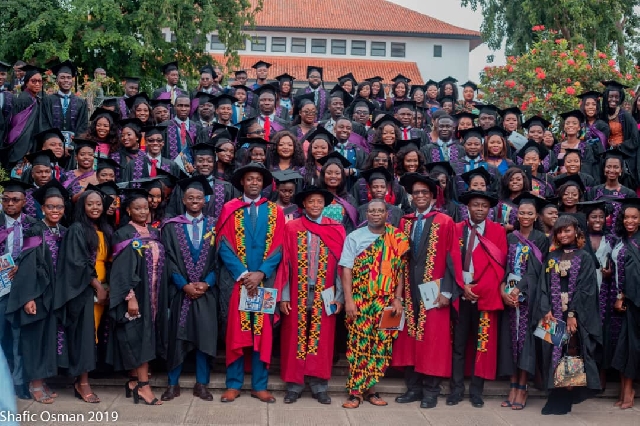 Normally in the last quarter of the year, universities and other tertiary institutions will matriculate incoming new students as well as graduate outgoing students at various levels such as certificate, diploma, undergraduate, graduate, and postgraduate. Another graduating season, 2021, has come and gone with the same rhetoric from the Vice-Chancellors, guests, keynote speakers, and other admonishers despite the failure to walk the talk into policy and practice.

Often at such ceremonies, grandaunts are told to be “entrepreneurial”, “creative”, “innovative” and “critical thinkers”. In addition, new graduates are admonished to “solve problems” and “take up leadership challenges” to walk Ghana’s development.

These are but a few repetitive rhetorics of the last decade or more. Albeit relevant, such otherwise inspirational messages have lost their novelty and have since turned very traditional lacking luster today.

One of the recent admonishers, Dr. Kenneth Ashigbey, for example, raised a rare matter that the graduates of the country's universities should not be afraid of “getting their hands dirty” in their pursuit of successful lives. Interestingly, in 1969 AL Adu, a former head of the Ghana civil service, did explain, that the denigrating was due to the white-collar job preference as graduates wished to emulate and be in the Whiteman’s position. But what has been the essence of such speeches at all?

Speeches are of significance. Just before the graduation season peaked, for instance, the Vice President of the Republic of Ghana had reiterated that the most dangerous national security matter in town was “unemployment”. Easily, a confirmation was found in one of such ceremonial grounds where the Finance Minister had pronounced that there were no government jobs available to graduands.

“That payroll is full” and they should look out there in the private sector for entrepreneurship. Unfortunately, both were to be “savers”, the Business Development and Special Initiatives Ministries had just collapsed. Interestingly, the latter ministry’s name connoted state entrepreneurship; but it failed to spell that out.

Take the Finance Minister’s critical comment above and the personality involved, for instance.

The Minister had benefited from the private and public sector knowledge and experiences.

It is also common knowledge that most of his work lifetime had been in the private sector; and, now turned a public servant with the mandate to create the enabling environment and opportunities for these teeming graduands to hit the ground running.

In retrospect, the former Senior Minister had earlier on in 2017 provided a baseline for the government that the public sector was full and could not employ irrespective of the IMF employment embargo from 2015.

A key question pops up seeking answers: Where are the entrepreneurial and multi-sector prowess of these managers and their kind as this gap of the untenable environment with no opportunities widens progressively?

Surprisingly and to the contrary, most admonitions fell on demanding entrepreneurship rather than businessmen establishment from grandaunds. Job seeking is normally slammed. But the two concepts are not the same even though they may end in enterprise and profit generation. Entrepreneurship is by far a difficult task of creativity, unlike doing business which is mostly what is found in the country: “buy and sell”. Even Ghana Government is going by the same principle and practice failing to be entrepreneurial but “practicing procurement and consumption governance”.

Entrepreneurship, per Schumpeter, involves creative destruction. Entrepreneurship creates, innovates and invents from nowhere with an unprecedented kind of results. It adds value to the creations that solve human challenges and problems. Therefore, the concepts can neither be interchanged nor distorted in meaning, principles and practice compared to buy and sell.

Again, this is akin to the education provided to the gradaunds devoid of entrepreneurial ingredients or quality. Thusly, the education which is devoid of experimentation, fieldwork and networking and so on. The teacher’s plight is ridiculed at the political managerial leadership apex. In the same vain, the quality of the student motivation to learn is doubtful. Rote learning and its lecturing twin, a colonial trail,’ continues to dominate the education field with no entrepreneurial outcomes.

Employers have complained about the quality of local graduates for some time now. Remedies remain far-fetched. In 2001, for example, Mr. Ishmael Yamson, then board chairman and chief executive of the Unilever Corporation, Ghana had delivered his keynote address criticizing the nation’s universities for the poor preparation of students to function effectively when they enter the industrial workforce.

This poor institutional performance, he added, imposed additional obligations and costs upon the industry to retrain these new employees and raise them to an acceptable standard before they are useful to the company.

Clearly, from the Ishmael Yamson days through Senyo Hosi’s recent graduate critique to date, no positive change is in sight. Furthermore, it appears that it is not even nationally accepted that standards of education is problematic challenging the graduand’s quality among others. Yet, the high expectation of graduate entrepreneurship to take off somehow without any problem identification and appropriate investments is unfair and inappropriate. Entrepreneurial education must connect the head, heart, and hand.

Opinions that have run in the public sphere for over two decades and cannot be transformed into values or policy, practices, and reforms must be seen as managerial leadership itself lacking what it preaches – Entrepreneurship. It is also a dereliction of duty.

Therefore, being truthful and fair at the graduation ceremonies is a call to the privileged speakers and decision-makers. Speakers must ensure their opinions and talks are transformed into national values, reform, policy, and practice to transform the narrative.

Agreeably, both Ashigbey and Adu’s voices must be well heard and understood excellently because soiling of the hand is the beginning of proper entrepreneurship development. Ghana’s quality of education must be raised accordingly.

At the tail, graduates should have the options of choosing from being entrepreneurial, businessman/woman, or seeking employment, at least, at the start.

It is so obvious that critical education reform is needed and must be a top-down affair as the bottom-up pre-tertiary appears highly reform fatigued.