Could Trump investigation stop him running in 2024? 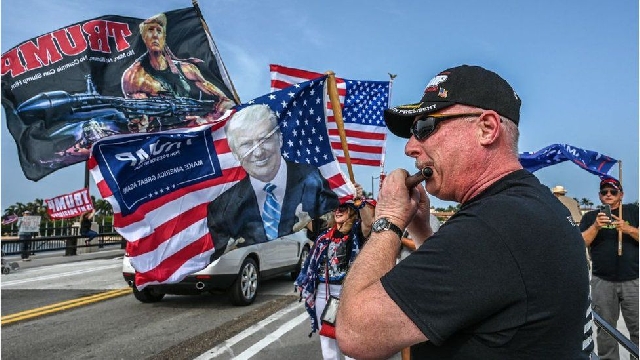 The dramatic FBI search of Donald Trump's Florida home on Monday marked a sudden escalation of investigations into the former president, and posed new legal questions that could - in theory - alter the course of the American presidency.

That's because if the inquiry - which is reportedly linked to Mr Trump's handling of classified presidential documents - ends with a conviction, some are suggesting he could be legally blocked from running for president again.

So let's take a deeper look at this. What does the FBI search say about how far the investigations into Mr Trump have progressed - and could he really be stopped from running in 2024?

Joseph Moreno, a former justice department prosecutor, said the nature and sensitivity of the search at Mr Trump's Mar-a-Lago resort in Palm Beach suggests the probe is moving in the direction of potential charges.

"Someone at the FBI and a federal prosecutor believe there's a criminal violation of the Presidential Records Act [which requires presidents to transfer all of their documents and emails to the National Archives] or other acts that govern classified documents, and that's why they moved forward," says Mr Moreno.

Much of the analysis in the wake of the search - and the key element that relates to the election in 2024 - has focused on one obscure criminal law: Section 2071 of Title 18 of the United States Code.

This states that anyone with custody of government documents who "willfully and unlawfully conceals, removes, mutilates, obliterates or destroys… any record, proceeding, map, book, paper, document, or other thing, filed or deposited … in any public office" can be fined or imprisoned for up to three years.

Crucially, it says that anyone convicted under that law shall "be disqualified from holding" federal office. This is why some are suggesting a conviction could all but end Mr Trump's rumoured hopes of returning to the White House.

"That's a real law, and if Donald Trump violated that law … that has real penalties, including the fact that he may never be able to serve in federal office ever again," presidential historian Michael Beschloss told MSNBC.

Some legal experts, however, quickly insisted that the law was unlikely to apply or survive any kind of appeal, as the only restrictions on presidential eligibility were citizenship, residence and age.

"The law would not pass muster under any sort of constitutional review," says Brian Kalt, a constitutional law professor at the University of Michigan.

Legal and constitutional experts also told the BBC there is no general prohibition against convicted criminals running for president. The most recent example being that of George W Bush, who had a drink-driving conviction, a minor crime, but went on to serve two terms.

The eligibility criteria for who can run for president is set by the US Constitution. These eligibility requirements are simple: a candidate must be at least 35 years old and a resident of the US for at least 14 years.

So there's a clear tension - between a federal statute that says those convicted under the above law should be barred from holding office, and the Constitution, which lays out clear requirements for who is eligible to run for president and makes no mention of criminal convictions.

A number of legal experts have also suggested that the Congress can disqualify a candidate from holding office through the process of impeachment, but the US Constitution grants no such power for convictions made under ordinary criminal law.

"The only way he could be barred from running is if he were barred by Congress [using impeachment powers], but that would be very unusual," says Mr Moreno, the former justice department prosecutor.

Some experts suggest that if Mr Trump were charged and convicted under Section 2071, prosecutors could ask the conservative-dominated Supreme Court to consider the question of eligibility. Prof Kalt, says, however, that it is unlikely the former president would be barred from office in such an eventuality.

"If I were advising Mr Trump, I would say you should not worry about this. You should be fine," says Mr Kalt.

While legal experts believe barring Mr Trump from seeking office through Section 2071 is a long shot, any attempt to do so could still have a major impact on his electoral prospects and public perception.

Marc E Elias, a leading Democratic party elections lawyer, referred to this in a tweet earlier. "I recognise the legal challenge that application of this law to a president would garner," he wrote.

"But the idea that a candidate would have to litigate this during a campaign is in my view a blockbuster in American politics."