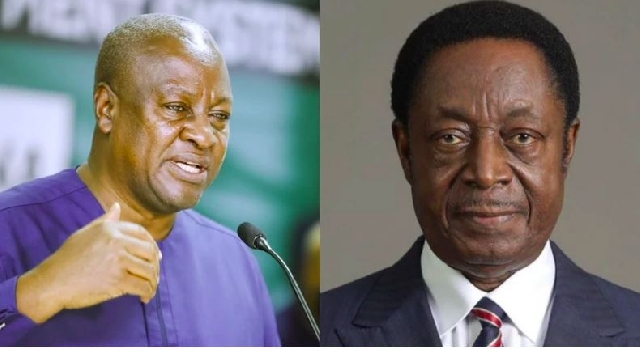 This is not a personal contest; this is about Ghana and the future of our children. It is about competing visions of what that future holds for Ghanaians.

Let’s stop apportioning the blame game and fix the NDC by applying the corrective measures.

I had resisted the temptation of writing for several reasons. But posterity would judge me if I don’t respond to some NDC members and those spurious polls by the so-called academic magicians in Ghana after the NDC lost the 2020 polls.

Especially those who think that Dr Kwabena Dufour should not contest Former President Mahama, so have started the hate Campaign against him.

Rather than initiate practical and pragmatic policies to drive their change agenda in the NDC like the AHOTOR project that Dr Kwabena Duffuor has started and is gaining ground. It has become headaches, bellyaches and heartaches for some so-called “Leading “members of the JM camp. What is wrong if Dr Duffuor decides to help constituencies nationwide with chairs, tables, canopies and sound systems to use for party work.

As a people, we are adept at passing the buck and blaming others for our failures. We hardly own up to our misdeeds or take responsibility for our actions and inactions. We see the faults always in our stars and never in ourselves. “He,” “she,” “they” or “them” caused it and never “I,” “me,” “we” or “us” that caused it. When it is convenient, we even blame God, the ancestors, the elemental beings and any other thing but ourselves. Spewing out lies about Dr Kwabena Duffuor that he’s even working for the NPP, such rubbish. All because he wants to contest the Flagbearer position of the NDC. Why is the NDC someone’s personal property? Is it for JDM?

One factor that has led to the collapse of many societies throughout history is internal decay brought about by inept and visionless leadership. That is what is happening in the NDC now. Who is the Leader of the Party, Chairman Ofosu Ampofo or Ex-President John Mahama? The Chairman of the party currently looks clueless.

Is John Mahama a Candidate? Has he announced that he’s contesting again? And that the NDC should allow him to lead for one term. Ahhhh, maybe the new executives and delegates will decide. Is it not true that the Middle Name of the NDC is Democratic. The pages of history are littered with examples of societies whose final descent into perdition was preceded by unprecedented internal rot. Regional Executives whose term of office will expire soon want to do an Acclamation. Try and see.

This type of bullying attitude is usually sustained by a corps of lackadaisical and moronic people that made a vocation of blaming others for the rot of society without as much seeing in their own lethargy, ineptitude and lack of foresight as significant contributory factors for that collapse. This is the product of the nemesis called “blame game” syndrome in leadership. Dr Kwabena Duffuor didn’t help the NDC and rather supported the NPP. Lies. Such blatant lies.

Blame game syndrome is as old as the history of creation. It has always been the stock-in-trade for those who fail. Those who fail in their assignments must always find a scapegoat for their failures.

Such blame game syndrome has always been the hallmark of inept leaders. Lacking vision and the initiative to elevate their thinking to glorious levels, and also of what should be done to transform society; a typical scenario of a bad workman quarrelling with his tools, such leaders invariably lead their societies into destruction. What is John Mahama coming to do in one term? What didn’t he finish? I have very often spoken about the guilt of collective amnesia as symptomatic of leadership in Ghana. Like the NDC they have formed the nauseating habit of passing the buck and blaming others for our failures. Very seldom do we own up to their mistakes and or take responsibility for our actions and inactions. We blame the elements for our woes; it is always he/she, they/them that caused our problems; and it is never us or we. I have heard many even blame God.

Those with the glorification of illusional popularity in Ghana like Choreography of dancers dancing to nowhere. Like John Mahama will win Dr Duffuor so he should allow JDM to go unopposed. Even President Mills was contested whilst he was a sitting president in his own party. Why should JDM not be contested?

I started this piece with a different title in mind but changed it because I believe that despite the distractions, in the face of severe provocation, Dr Kwabena Duffuor has allowed political maturity to prevail. He has a genuine record of accomplishments as a Ghanaian. His work is a public record and it speaks for itself.

I have always said when it comes to choosing a presidential candidate, whether in politics or business, the essentials extend well beyond charisma, connections and political leverage. The fundamental elements are trust, loyalty and complementary skills and qualities.

The NDC lost the reality of what their opponent was doing. They went for a target and they got their target, which was too narrow. The closing picture of the campaign was an image of Mahama sharing a stage with two presidents. The message was about continuity, not change. It was about Nana Addo was too old. Consistently.

My hope is that the Akufo-Addo victory will be a lesson to progressives that the NDC fought NPP tooth and nail, for social, economic and infrastructural progress that the NPP tried to obstruct in every way. Progressives took the NDC’s victories for granted and failed to live up to their end of the bargain at the polls.

Those pointing accusing fingers at age and other progressives shouldn’t look back at December 7, 2016, and December 2020and ask how did conservatives deliver the presidency to the worst person the NPP had to offer. The protesters should look back at least on the last 2 years and ask themselves, how did we allow ourselves to get so comfortable that we failed to deliver the presidency to the best person that the NDC had to offer.

The intra-party insults, accusations and insults are not helping anyone and the earlier those doing that together with their surrogates learn this lesson, the better it will be for them and the NDC as a progressive party.