Emily Topping writes: Parallels of poverty between Ghana and the United States 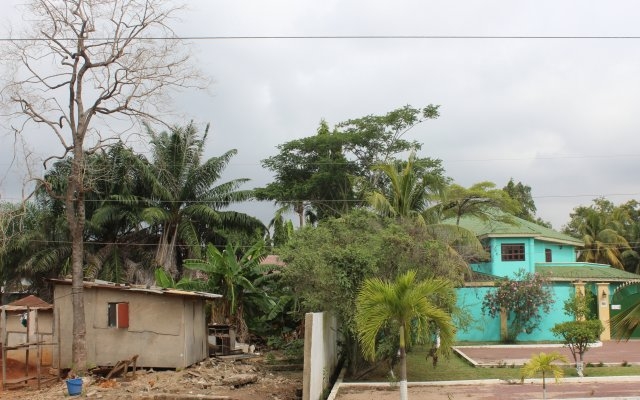 In the U.S. the rich are separated by gates and padded by each other. We call gated neighborhoods “communities,” which makes them sound intentional, even spiritual maybe, though members are more connected by tax-income bracket than a set of beliefs.

At the gate, there’s often some kind of horse statue or fountain, evoking visions of Europe. You type a code into the keypad and the entrance opens to swallow you in. The houses inside are grand, mass-produced, and look eerily alike - architects have taken to calling them “McMansions.”

Some of my friends grew up in high-end areas like this. They knew all their neighbors, and even if they didn’t, they trusted them. At night we ran around the streets in a pack of pre-teen girls —our parents knew the only crime likely to occur was a game of ding-dong ditch [A game American teenagers play, where you ring someone's doorbell and then run away]... It was safe. The gates kept us in, and more likely, other people out.

When I arrived in Accra, Ghana this summer, for my study-abroad and internship programme, one of the first things I noticed was incredibly rich and poor areas existing directly next to each other. The mansions were not only surrounded by gates, but barbed wire. Tall cinderblock walls bordered the properties. Some walls were even decorated with shards of glass, transparent daggers stuck into the wet mortar.

Why did this feel so much more hostile? The makeshift barriers seemed accusatory. They contained a threat of violence - I imagined blood dripping down the shards every time I looked, until I began to look away. Considering Ghana has one of the lowest crime rates of African countries, I wondered what people inside the walls feared.

Income inequality in Ghana is a huge problem. While overall poverty has decreased since the 90s, the gap between rich and poor has widened. According to UNICEF: the richest fifth of the population earns nearly 50 per cent of national income, while the bottom fifth makes five per cent. According to estimates from Oxfam International, it would take a poor woman nearly 1,000 years to earn what one of the richest men make in a month.

The other day at my internship, I spoke to a Ghanaian friend about this divide. “You see that wall?” He asked, nodding out the window at one of the nicer houses in the neighbourhood. Sure enough, it was fortified like a castle. “They’re scared.” “They” are the rich. The poor, it implies, are angry.

It only takes a drive through Accra to understand how differently some people live. In lower-income neighbourhoods, garbage piles up along the sides of roads. Because many Ghanaians cannot pay for door-to-door trash removal, they dump their waste in open spaces. Plastic bottles clog the gutters, polluting the water stream and causing homes to flood in the rain. Goats and birds pick at the strewn waste along the shore.

A 2012 report by the World Bank shows that Ghana’s economy loses GHS420 million (US $290million) a year to poor sanitation. The vast majority of these costs come from the early burial of Ghanaians due to diarrhea - more than a quarter of which are children under five. Not only does poverty affect quality of life, it often cuts it short.

It seems horrific that the circumstances of a person’s birth would lead them to an early death, especially over something so basic as lacking access to a toilet or drinkable water. Aren’t these the sort of conditions that lead U.S. President Donald Trump to refer to African nations as “sh*t-holes?” Or later, imply that congresswomen from Puerto Rico and Somalia return to their “totally broken and crime-infested” countries?

Yet, what “patriotic” Americans fail so often to realise is the parallels between their own country and those they criticise. Poor Ghanaians are dying from lack of sanitation, but so are Americans.

The town of Flint, Michigan, in the Midwestern U.S., has been without clean drinking water for five years. After cost-cutting measures in 2014 to change the local water source, residents reported a change in taste and colour of the water. Videos surfaced of sludgy, brown liquid flowing from the pipes, which the Environmental Protection Agency confirmed to be contaminated with dangerously high levels of lead - a risk to even wash hands or shower in, let alone drink.

Over 100,000 people were exposed. 87 cases of Legionairre’s disease, a waterborne illness, were reported between 2014 and 2015, resulting in 12 deaths, although health officials acknowledge that the real death toll may be higher. It is worth noting that the poverty rate in Flint is significantly higher than in the rest of the United States: 41 per cent, compared to 13 per cent across the nation.

Does this seem like a problem that a developed country should be facing?

Across the United States, poor people and minorities are more likely to suffer from environmental degradation, pollution, and poor health. According to Medscape, five times as many black children die from asthma as white children. This may have to do with the fact that poorer neighborhoods are likely to be the same ones with bad air-quality. Families living within three miles of a coal power plant have a 15 per cent lower income than the national average, says a report from the National Association for the Advancement of Coloured People.

I can’t help but predict that this trend will continue as the effects of climate change worsen. While the rich will be able to afford air conditioning as heat waves soar, and pay increasingly high prices for bottled water as our resources are polluted, the poor will suffer. On a global scale, developing countries with weak healthcare infrastructure will have more casualties than their developed counterparts - despite the fact that wealthy nations like the U.S. emit more greenhouse gases.

The divide between rich and poor is far from just an African problem. Perhaps wealthy Americans find the reality easier to ignore - we collect among each other, in neighbourhoods and work and social circles, and tell ourselves that the real poverty is far away. In Ghana, it stares you in the face. But the reality of the situation is worldwide and growing: unless we change, and fast, much of this earth will become unlivable. At that point, our gates will not help us much.