Gemma writes: The paranoid parishioners and the backpack man 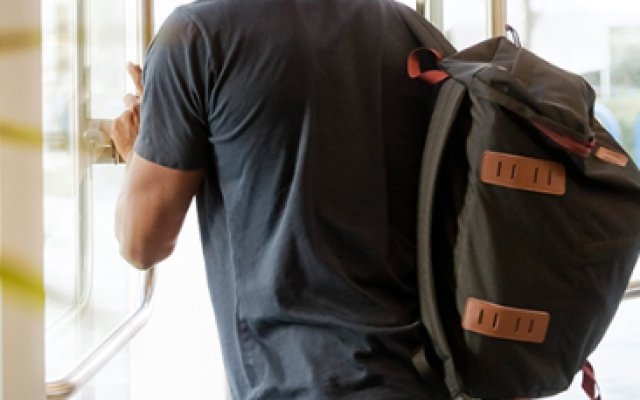 Some two months ago, a man was caught with a loaded gun in a catholic church at Hamle in the Upper West Region. We had heard about terrorist attacks at Catholic churches in neighboring Burkina Faso not long before the incident at Hamle. Till date I still think of what could possibly have happened if members of the church did not raise the alarm.

Following that , the Christian Council, the Catholic Bishop Conference, Ghana Pentecostal and Charismatic Council and the security agencies have been holding meetings to find preventive measures especially when security experts including the African Center for Security and Intelligence Studies had issued an alert that the Salafi-Jihadist group that carried out the attacks in Burkina Faso has been moving in and out of Ghana through the border with Burkina Faso over the past few months.

We do not want to be like New Zealand which suffered a terrorist attack despite several warnings. President Akufo-Addo during his recent tour of the Upper West region said security had been beefed up at the various borders to fight terrorism threat. The security agencies cannot do it alone so he called for public support and cooperation, besides, it was a civilian who saved the situation at Hamle, otherwise, the country would have already been thrown in a state of mourning.

I remember the church president of St. Michael Garrison Church at 37 in the Greater Accra region, where I worship during a church service called on parishioners (church members) to be vigilant and report any suspicious character in and around the chapel to church authorities, especially those who wear huge backpacks. He also mentioned that the ushers had undergone some sort of training to help detect such people easily and the emergency response.

Less than two months later, on the 18th of August 2019, as the Bible says in Mathew 11:28 “Come to me all ye that labour and are heavily burdened and I will give you rest,” I left for church to seek the inner peace I needed after an eventful week, however, I was late so I had to sit behind. I quickly scanned around to check if anyone was having a backpack. None was, at least I did not see one from where I was sitting.

As I soaked in the homily (sermon) by the priest to establish a special connection with God, I knew that church was the place to be. Then during consecration (latter part of church), a man wearing black jeans, blue shirt, and a cap with a backpack entered the church from one of the backdoors. The usher manning that door had left her post briefly. Almost everyone especially those sitting at the back who saw him enter turned to look at him suspiciously.

Now not only was the backpack suspicious, the cap was. Here is the thing, Catholics and especially Christians in Ghana do not wear cap to mass. You will not necessarily be forced to take it off but by convention it is not done. It is some kind of unwritten rule. Just as you cannot wear a cap in the presence of the King of Asanteman, you do not do same in a catholic church. It is to show reverence to God. So, the cap bit was just enough to be apprehensive, then the flashpoint - the backpack.

As the man took his seat, four ushers (all women) moved towards him and demanded to see the contents of the backpack. The man obediently opened it and they checked, all the while the service was ongoing but curious and fearful ones like me kept looking at the man, waiting for the reaction of the ushers to decide our next line of action.

It turned out he was carrying nothing dangerous, at least the reaction of the ushers after the search did not give us that impression. However, the man sitting in front of me did not look convinced as he kept turning to look at the man in the course of the service, just in case! The backpack man throughout the rest of the service put his head on the pew. I and obviously others sat on edge throughout the service. I heaved a sigh of relief when service ended without a ‘breaking news’ from our church.

But what would have happened if the ushers found a bomb or gun in the backpack? How would they have handled it? Do the ushers have the technical knowledge to have dealt with the situation appropriately? If we had placed phone call to the Ghana Police Service, would we have got a quick response?

The priest who said mass that day is a lieutenant, would he have been able to help save the situation? The chapel is not too far from Burma Camp, would they have arrived at the scene to deal with the situation? These are questions I keep asking myself but do not have answers to because nothing bad happened.

It is rather sad to know that the church which is supposed to be the peaceful home for many has turned into a place where you constantly sit on edge while checking if the person sitting next to you is not a terrorist, ready to reunite you and your Maker without seeking permission. “Even though I walk through the valley of the shadow of death, I will fear no evil, for you are with me; your rod and your staff, they comfort me.” ~ Psalm 23:4. But we were scared. How is it that the Bible teaches us not to fear for the Lord is with us always but yet go to church afraid that we may lose our lives.

Why would church groups educate its members to be weary of suspicious characters when the Bible has told us not to be afraid? Do we believe in God just for believing sake or we indeed trust His words?

Again, one may ask: why did those in Burkina Faso and other churches and mosque die if indeed God’s rod and staff are protecting us? Are they not mightier than the bullet? However, the same Bible says in Mathew 10:28, “And fear not them which kill the body, but are not able to kill the soul: but rather fear him which is able to destroy both soul and body in hell.”

John 11:25 NIV, Jesus said to her, “I am the resurrection and the life. The one who believes in me will live, even though they die’’. It takes the grace of God to believe and that is called faith.

What is the plan to deal with terrorism?

We must never relax, every act that looks suspicious must not go uninterrogated. At least from what I saw, civilians are doing their bit by being suspicious, and raising the alarm, but are the security agencies keeping their end of the bargain well enough?

We must not wait for the worst to happen first. Fighting terrorism is not a nine day wonder. We must take every opportunity to prevent it. At least we should get our security agencies patrol the churches on Sundays. And just because the topic terrorism seem lost in media discussions does not mean it isn’t a possibility again.

Having said this, the subject must not be lost in our conversations. Let’s continue to talk about it and give tips on its detection. I believe it’s better to be paranoid than to be taken by surprise.