Ntim stands tall within the family 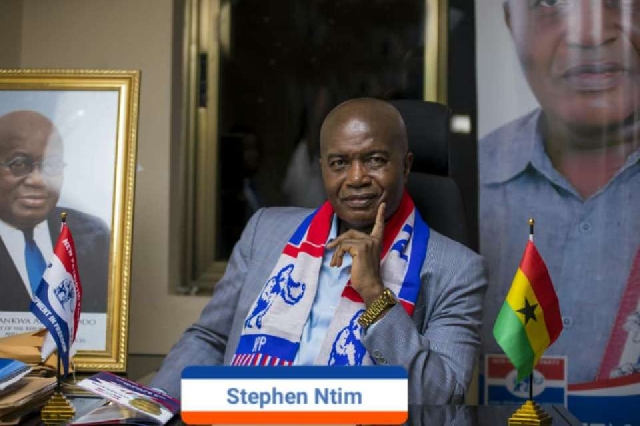 Come Saturday, the Danquah-Busia-Dombo (DBD) tradition will congregate at the Accra Sports Stadium to perform their four-year ritual of electing National Executives.

Decisions at this meeting will be the watershed to predict the fortunes of the tradition ‘breaking the 8’ mantra.

In conformity with history, convention, customs and usages, we have always been electing leaders based on their loyalty, devotion, competence, consistency and political apprenticeship. It is in the light of this that I have been compelled to share my thoughts with the following “Krukudites” on the chairmanship race.

I want to state unequivocally that all the seven candidates that have applied for the chairmanship merit the position. However, like “Ahenfo Kyeneye, ebi deda ebi akyi”, to wit, some are streets ahead of their contemporaries.

It is a sad spectacle that people vouching for political positions usually tout their certificates, from First to PhD Degrees, or professional qualifications. They always fail to differentiate between “certificated” and “political” positions. Whilst possession of academic degrees may be necessary, it may not be sufficient for politics.

In politics, it is rather the level of apprenticeship that matters most since politics is a vocation. One needs to pass through the political mill to be equipped to deal with all unimaginable situations.

A cursory look of previous Chairmen of this tradition, limiting myself only to the 4th Republic, would suffice my argument. The longer the level of political apprenticeship, the greater the chance of leading us with, only few exceptions.

The late Peter Ala Adjetey took over from Da Rocha, having carved his niche of leadership from Joe Appiah’s Justice Party as Secretary General.

Odoi Sykes is one of the exceptions to this rule. But even here, faithful disciples will agree with me that the pivotal role played by one of the greatest giants and his group for him cannot be discounted.

In 2002, Mr. Haruna Esseku, who had previously served as Central Regional Chairman became the National Chairman.

Mr Mac Manu took over from Haruna Esseku, having had his leadership rudiments as the Western Regional Chairman.

Paul Afoko also comes within the class of the exceptions. However, any party faithful can testify to the various factors that played out during the Tamale congress.

Finally, Freddie Blay became Chairman, having served as First National Chairman, and subsequently as Acting Chairman who led us to win the 2016 elections, and was re-elected.

Ntim has been a common figure since he was elected as First National Vice Chairman from 2002-2006. He has never looked back on any activity of the party at all levels.

THE FIVE GREAT WITH LION HEART

In politics, one needs a lion heart to climb to the top. Within DBD tradition, five men are seen as gems for such mission.

Dr J. B Danquah, our foremost leader, never gave up in spite of the numerous downfalls, mostly orchestrated by the Convention Peoples Party (CPP), until his death. He contested both parliamentary seats of Abuakwa Central and North and lost.  He again lost to Dr. Nkrumah during the Republican elections in 1960.

Professor Busia had to leave the country unceremoniously as opposition leader, had to abandon his professorship chair at Oxford to work tirelessly for the success of this tradition.

Under the 4th Republic, His Excellency Agyekum Kufuor had his fair share of the frustrations before succeeding in 2000. Per his biography, at a time, he was financially challenged, and the Concordia saga also compounded issues for him. But he never gave up.

Our current President, Nana Akufo-Addo, cannot recall his numerous ups and downs on his political journey.  He had to go through tough battles to secure and retain the presidential slot of the party on numerous occasions, till he eventually won the 2016 general elections.

Stephen Ntim has never fought for the presidential slot before, but his determination to become the leader, having lost on four occasions, has always been unyielding.

THE SAD END OF A HAPPY CHAPTER

Come December 2024, the two most glamorous products of this tradition, namely His Excellencies Agyekum Kufuor and Nana Akufo-Addo, will say goodbye to frontline politics.

Messers Owusu Agyeman, Addo Kufuor, Osafo-Maafo, J K Mensah, Kwadwo Mpiani and others will also be doing same because of their advanced ages.

The tradition will be greatly orphaned politically. The tradition is also mindful of the fact that a “non-tested presidential candidate” will lead it into the next elections.

It is against this backdrop that the mantle of chairpersonship should fall on a well-tested, tolerant, mature, and experienced person who had previously undertaken such national exercise for the party.

Do not forget how NDC was jettisoned five days to the December 2004 elections, which saw the world of their then General Secretary and the party torn apart.

This operation was spearheaded by marvelous Stephen Ntim. In hunting, we take the dog that goes by the name “Ayebida” and not “Nso Nyame Ye”.

THE UNIQUENESS OF NTIM

Any literature of Ntim and NPP will require a book to do justice to the topic.

Ntim is not a “millionaire”, but is always prepared to put what he has at the disposal of the party or fellow Kukrudites.

Who in NPP would not admit the “Ntim-mania scent”? Ntim’s undeniable imprints are not for fetch in all the 275 constituencies of Ghana. His intermittent donation of cars, supply of office stationery and other auxiliaries are there for all to see.

His philanthropic pedigree reminds this tradition of the great Stephen Krakue of blessed memory.

His selfless devotion to this tradition remains unchallenged. He had all the opportunities to have been a minister or parliamentarian, but because of his unalloyed love to render direct service to the party, he denied himself of all these.

Ntim has served the party in the following capacities:

I take this opportunity to congratulate all brothers of the Kukrudite family who are contesting for the chairmanship position, especially for the maturity displayed so far. My humble appeal is that they form the ‘Adonten’ and ‘Kyidom’ unit around Ntim to ‘break the 8’.

The writer is a former MP for Kumawu and Chairman of the National Research Committee, NPP.