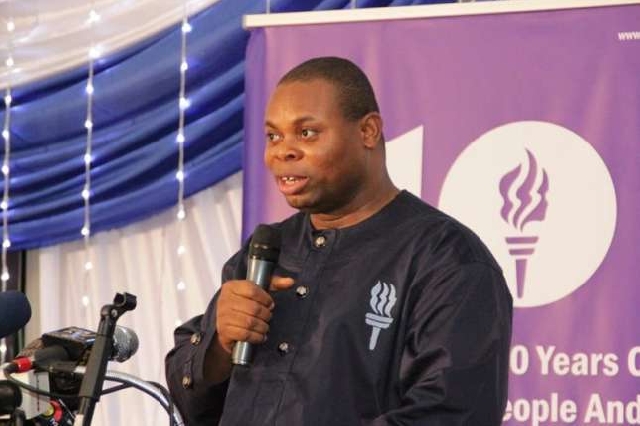 Franklin Cudjoe is the CEO of IMANI Ghana

As our democracy grows and matures, manifestos are increasingly becoming an essential document in canvassing for the mandate of the people. It represents the well-thought through policies of a party should it be given the opportunity to govern as against the knee-jerk and somewhat “political” talks on political and campaign platforms.

Earlier in the year, the NDC did a scientific diagnosis of the performance of the NPP in relation to the promises made in their 2016 manifesto and exposed their abysmal scoring. They counted each promise in the manifesto and scored it- with page numbers provided for where each promise they counted can be found in the NPP manifesto. Even though it was the difficult path/methodology, they believed it had to be done to deepen our democracy and make political campaigns issue-based.

Imani has also done a scoring of the 2016 NPP Manifesto and assigned a different score. After studying their report, I have come to strongly disagree with them especially on their methodology. I explain some of the challenges I have with the Imani approach which cast doubt on the veracity of their score.

Economy - income and wealth/jobs and earnings

Overall, the manifesto is then scored based on these sub-themes. However, there are other critically important sections of the manifesto with very relevant promises which must be captured as well but were overlooked by Imani. These are equally important promises which form part of the social contract the NPP signed with Ghanaians. The 2016 NPP Manifesto itself was categorized into 18 subject areas as follows:

Imani’s work aggregates some sectors/themes into 11 sub-themes in all. The result of this aggregation was that some themes were omitted from their analysis. For example, a whole section like Growing Together did not find expression in the Imani work. To the effect that these and other equally important promises were not captured, make their conclusion, to put it mildly, inaccurate ab initio.

From the five broad thematic areas, Imani then proceeds to assign weights to them as follows:

The basis for the weights as listed above was based on an explanation provided in Page 10 of their presentation as follows:

“Empirical evidence from the development and political economy literature shows the relevance of the quality of governance and a resilient economy to the well-being of people (Acemoglu & Johnson, 2005; Fosu, Bates, & Hoeffler, 2006; Helliwell, Huang, Grover, & Wang, 2018). These two are necessary for investment in education, social intervention and infrastructure to be sustained.

However, the study cited does not purport to rank governance and a resilient economy over say security or science and technology to the development of the political economy of the nation. It just shows they are relevant as are other equally relevant sectors. Besides, there are other studies which establish a strong positive link between security and development- see (Dobbins, 2009) and (Grenfell and James, 2008). The point is, security can equally be ranked higher then governance based on certain studies. The weights assigned were as such done arbitrarily. Although Imani admits that these weightings were done subjectively, I believe such an important exercise which has great bearing on our democratic development could have been done objectively.

Anecdotally, it may seem logical to conclude that the economy should have more weight than say human capital development or the social sector. However, that would be looking at things in simplistic terms. In the real world, the linkage(s) between (among) sectors of the society can be likened to a reversible reaction. One may cause the other which will, in turn, cause the former. So the weight of one thematic area can, in a lot of instances, be equally assigned to the other. If you asked the NPP itself to assign weights, they might probably weigh Human Capital Development more because of the Free Senior High School Policy.

Also, the weightings stand the risk of committing fallacies of composition and division. As Imani is weighing a sector higher than the other, are they saying they will rank all the individual promises on the economy higher than the promises on human capital development? Recall the composite weight on the economy is 0.25 and that of human capital development is 0.15.

Imani grossly under-reports the number of promises made by the NPP in their 2016 Manifesto. For example, under Agriculture, while the NDC counted 74 promises, Imani counts 54. They consolidate Economy and Trade and Industry and assign promises of 87. However, the NDC counts 103 promises for both. This is replicated in all the other sectors. In all, Imani counts 510 promises while the NDC counts 631 promises. Recall that for the NDC, they provided page numbers of where each promise they listed can be found in the 2016 NPP Manifesto.

Imani classifies obviously unfulfilled promises as fulfilled. For example, the promise to improve water quality (either water bodies or drinking water) is reported as fulfilled by Imani but have seen no improvement. In fact, we have rather seen a deterioration. Also, Imani assigns road expansion and interchanges as fulfilled. The evidence of abandoned road projects and numerous demonstrations over roads are there for all to see. The NPP government has also not completed even one interchange!

Imani also aggregates other areas and assigns it a score. For example, they assign an aggregate score of 77% for Macroeconomic Stability. This cannot be true when budget deficits are rising, the cedi depreciation continues, inflation keeps rising, central bank lending to the government is increasing, etc.

The table below gives an overview of some of the macroeconomic indicators: 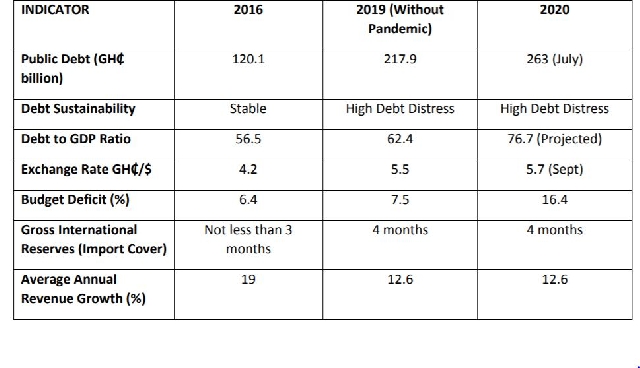 The table shows that almost all these macroeconomic indicators have worsened.

While I commend Imani for their work, I strongly disagree with their methodology and conclusion. Their methodology tends to obfuscate a rather simple but tedious exercise. Various promises were made and they are supposed to stand shoulder to shoulder. A promise on the economy may be valued more to one voter. Another voter may value a promise on the society more. A political party may win these two votes based on the individual promises. General weights cannot therefore be applied to the areas on behalf of the voters when they are valued differently. This also means, depending on who the voter is, areas may weigh less or more. This unnecessarily complicates a rather simple exercise. Each promise is part of the social contract politicians sign with the electorates and must, therefore, have equal weight.

Also, the Imani methodology grossly understates the promises made in the 2016 NPP Manifesto while overstating the fulfilled promises.

The writer, Frederick Amissah is a fellow, Institute of Public Policy and Research- Ghana