The dazzling crown resting on top of the Queen’s coffin 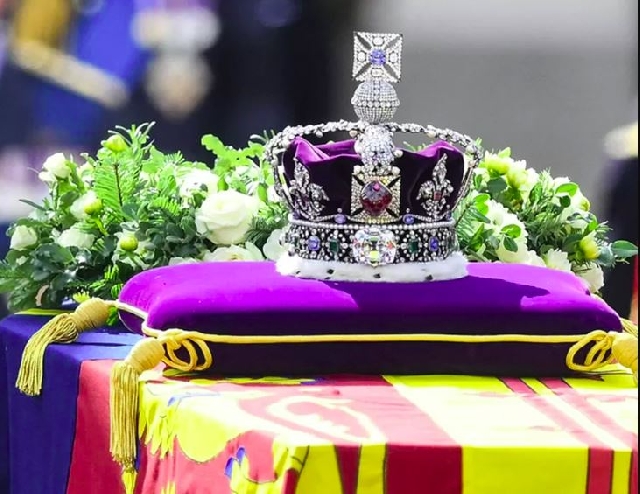 The Imperial State Crown sitting on top of Her Majesty's coffin

The Queen's coffin is now lying in state in Westminster Hall having been escorted from Buckingham Palace by King Charles, Princes William and Harry, and other senior royals. On top of the coffin sits the Imperial State Crown, perhaps the most familiar item in the Crown Jewels - a priceless collection of tens of thousands of gemstones collected over the centuries by British kings and queens.

"It can be quite hard to look at sometimes because of the sheer light that comes off them. It's literally dazzling… visually overpowering," says historian and author of The Crown Jewels, Anna Keay.

She says historically, right back to the Middle Ages, crowns were viewed as expressions of wealth and status.

Made in 1937 for the coronation of the Queen's father, King George VI, the Imperial State Crown was designed to be lighter, and to fit better, than the crown it replaced - which dated back to Queen Victoria. But nevertheless, the Imperial Crown still weighs in at a hefty 2.3lbs (1.06kg).

During her reign, Queen Elizabeth II would wear it annually for the State Opening of Parliament - as she sat on a golden throne reading out the government's key legislative plans for the year ahead.

The Queen, with the Duke of Edinburgh by her side, wearing the crown at the State Opening of Parliament in 2016

In 2018, the Queen joked about how heavy the crown felt to wear.

"You can't look down to read the speech, you have to take the speech up, because if you did your neck would break," explained Her Majesty.

"There are some disadvantages to crowns, but otherwise they're quite important things."

The Imperial State Crown includes the 317 carat Cullinan II diamond - sometimes called the Second Star of Africa. Cut from the largest diamond ever found, it was given to Edward VII on his 66th birthday by the government of the Transvaal - a former British crown colony - in present day South Africa.

It also includes the oldest gem in the royal collection - a sapphire said to have once been worn in a ring by the 11th Century king of England, St Edward the Confessor. The stone is now set at the centre of the cross that tops the crown. 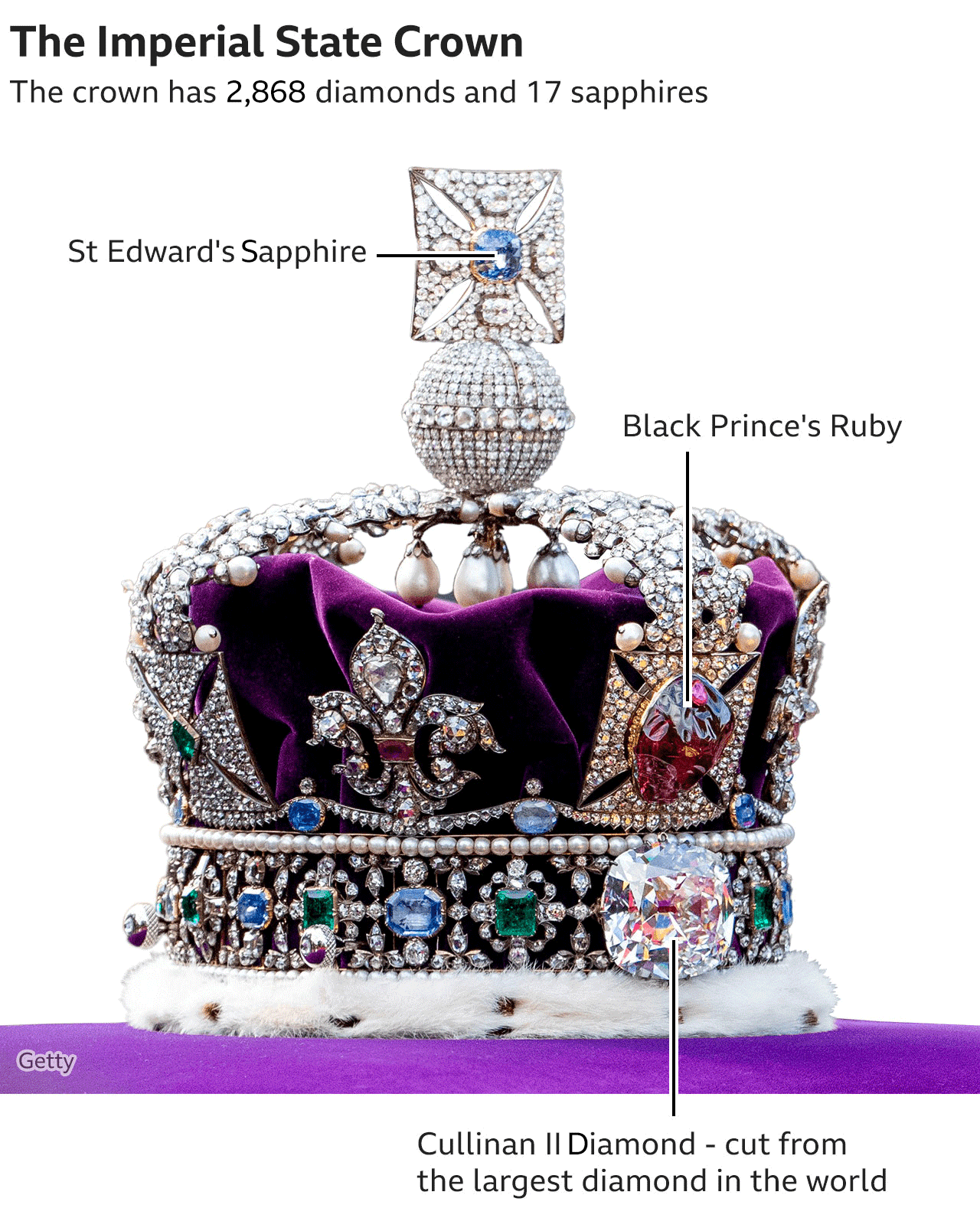 The Queen was particularly keen on a large red gemstone in the crown - known as the Black Prince's Ruby. It is thought to have been worn in 1415 during the Hundred Years' War by Henry V at the Battle of Agincourt - when English forces beat the French to the south of Calais.

Legend has it that the king placed a feather in a hole drilled into the ruby. "It's fun to see," the Queen told the BBC in 2018, "the idea that his plume was put into the stone on his helmet - bit rash, but that was the sort of thing they did, I suppose, in those days."

BBC presenter Clive Myrie - who was given unprecedented, close-up access to the crown earlier this year for a BBC documentary - described seeing it as "almost unreal".

"The clarity of the diamonds is absolutely unbelievable."

But putting a price on how much the Imperial State Crown - and all the Crown Jewels - is worth is nigh on impossible. Royal expert Alastair Bruce told the BBC documentary the collection was beyond monetary value.

"Calling it priceless is sensible, but you can just add as many zeros as there are diamonds in the collection."

When not in use, the Imperial State Crown is on public display in the Jewel House at the Tower of London - which has been home to the Crown Jewels for more than 600 years.