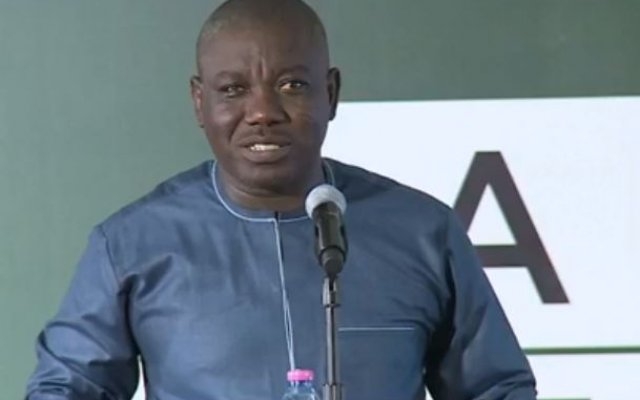 The Member of Parliament (MP) for the Bolgatanga Central Constituency in the Upper East Region has mocked the economic management prowess of Finance Minister Ken Ofori-Atta and cautioned him to be wary of borrowing to eat kenkey and fish.

According to Mr Isaac Adongo, Vice-President Mahamudu Bawumia, who he referred to as ‘Walewale Adams Smith’, seems to have abandoned the “sinking economic management ship” and found solace in the “digitalisation ship”.

“The Vice-President has shifted gears into digitalization, leaving economic management on the shoulders of the incompetent Finance Minister,” Mr Adongo mocked.

“Since the Vice-President jumped ship, he has turned himself into a ‘Yahoo boy’ whose only concern is how to fidget with the internet in the name of digitalisation,” he said.

Mr Adongo said these on Accra100.5FM’s evening news bulleting in reaction to a recent Bloomberg article on how the economy has been run down.

According to the NDC MP, with Ghana’s economy on the edge, the country can no longer go onto the international borrowing market “only to come and eat kenkey and fish like the Finance Minister has been doing since he assumed office in 2017”.

“I’m surprised the president is still keeping Mr Ken Ofori-Atta at post even in the wake of glaring evidence that the economy is not in good shape”, the opposition MP said.

“With the penchant for spending as a private person and a public officer, in other jurisdictions, Mr Ken Ofori-Atta would not have come near the position of a deputy minister,” he argued.

He pointed out that what Bloomberg said about the debt levels of the country, is something he said a year ago.

“Bloomberg is just reiterating the concerns I’ve raised a year ago”, he noted, for which he said “government communicators rained all manner of insults on my person as the MP for the people of Bolgatanga Central”.

The lawmaker said the bleak situation of Ghana’s economy cannot be saved by the controversial E-levy, adding that if GHS20 billion could not save the situation, what then will GHS9 billion do.

The situation, he said, can only be saved if the president stops his extravagant expenditure on needless things like his creature comforts.