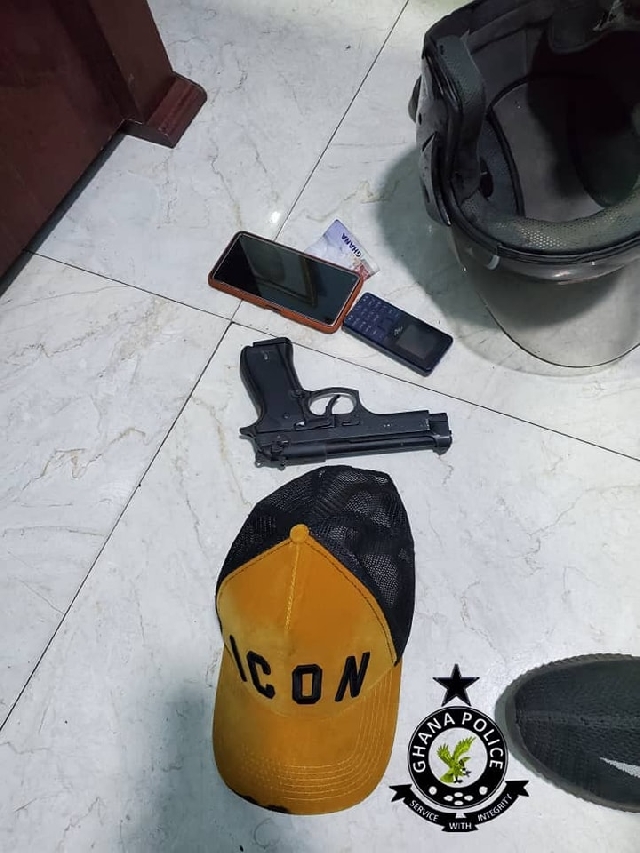 Items retrieved from the robbers

The police, on Tuesday, 13 July 2021, stopped an armed robbery attack on a victim who was being trailed by two suspected armed robbers on a motorbike on the Amasaman-Nsawam main road in the Greater Accra region.

The victim, who says he could tell from his rear-view mirror that the bikers were following him, felt safe to park closely to a private car.

Unbeknownst to the victim, however, the private car was an unmarked car being used by the police to follow the pillion passenger, known as Suleman Alhassan alias Man, aged 35, for alleged involvement in a series of robberies in Accra and Tema, as part of surveillance on the suspect.

The suspect, on seeing the police, opened fire, hitting the passenger side headlight of the unmarked car.

The police returned fire, hitting the suspect in his face.

The rider was also shot to prevent his escape.

Items retrieved from them include a Bruni MOD 92 foreign pistol loaded with two live rounds and the Royal motorbike.

The police has urged the public to volunteer information on suspected criminals and assured the informants of utmost confidentiality.