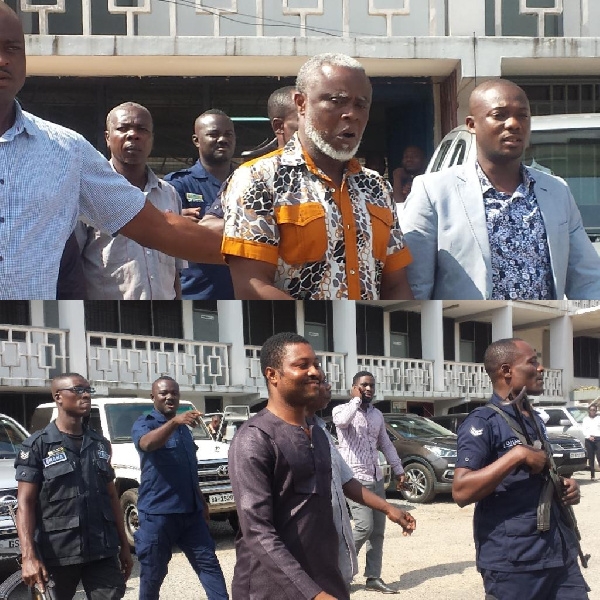 Some of the alleged coup plotters in police custody

The Accra High Court hearing the case of Dr Frederick Yao Mac Palm and ten others, being held over alleged treason, has adjourned to April 13, 2021, due to the upsurge of COVID-19 cases in the country.

Justice Samuel K. Asiedu, an Appeal Court Judge with additional responsibility as a High Court Judge, said the Court had been advised that due to the rising cases of the pandemic, cases involving transporting accused persons from the prisons should be held up for the meantime.

He noted that the trial will start on April 13, on condition that the situation improved dramatically, adding that by so doing, the lives of the inmates would not be endangered.

All the accused persons have met their bail conditions except Donyo Kafui, Johannes Zikpi, a civilian worker for the Ghana Armed Force and Corporal Seidu Abubakar, soldier.

The trial was booked to start on Tuesday, February 16, after the jury was empanelled on January 21, 2021.

Meanwhile, Mr Victor Kwadjoga Adawudu, counsel for Donyo and Corporal Akanpewu prayed for the Court’s direction on an alibi (absent at the time of the crime) application he filed for his clients.

Prosecution team, led by Ms Winnifred Sarpong, Principal State Attorney, was charged by the Court to complete its investigations for Corporal Akanpewu as it (prosecution) had informed the Court that it had only completed that in respect of Donyo because it did not know that of Akanpewu.

Counsel for Warrant Officer Class II (WO2) Esther Saan also appealed to the Court to vary the part of the bail conditions which compelled her to report every two days to the Military Commanding Officer to enable her to perform the mother’s funeral rites in Wa as she was in custody when she died.

Ms Sarpong objected to the oral application and asked that counsel came with a formal one, which the Court agreed.

Prosecution had earlier told the Court that Dr Mac Palm is a medical doctor and the Director for the Citadel Hospital, Donyo, alias Ezor is a blacksmith, Debrah is a Freight Manager whereas WO2 Saan, Corporal Abubakar, Lance Corporal Ali and Sylvester Akanpewu are soldiers.

She said Colonel Kojo Gameli and Assistant Commissioner of Police (ACP) Benjamin Korsi Agodzo, are senior military and police officers in that order. All the accused persons belong to “Take Action Ghana,” a Non-Governmental Organisation.

In June 2018, security agencies picked up intelligence of the group’s intension to overthrow the government and usurp executive powers, thus, they had several meetings to that effect at the expense of Dr Mac Palm.

Prosecution named some of the issues discussed at the meetings as recruiting more soldiers, acquire arms, procurement electronic gadgets, on how to capture the President among some key personality in government as well as draw a road map.

Ms Craig said their discussions also included whether to kill the President, adding that all these were recorded.

Donyo, she said, was brought to Accra from Alavanyo in the Volta Region, thus, he brought his tools to the Citadel Hospital to manufacture local arms and later Dr Mac Palm would procure more to augment his armoury.

The prosecution said investigations revealed that the group was incorporated in August 2018 and a WhatsApp platform was created to recruit members, where ACP Agodzo was added and he supported them with GHS1,000.00 and drafted a speech for Dr Mac Palm.

On September 19, 2019, Dr Mac Palm and Donyo went to the Military Shooting Range to test fire and they were arrested, after their release, they went to the Hospital to conceal the manufactured weapons but luck eluded them when the military and other security agencies stormed the place the next day, leading to their arrest.

The rest were also arrested and handed over to the NIB, formerly, BNI and a search at the Hospital revealed the weapons.