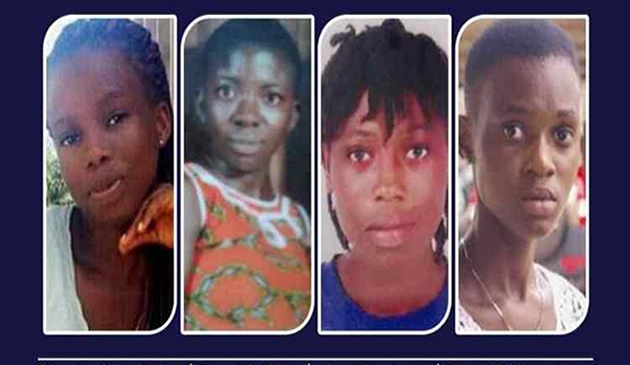 The girls were all murdered
The Sekondi High Court has set March 5, 2021, as judgment day in the murder case involving two Nigerian nationals, Samuel Udoetuk Wills and John Oji, who have been accused of killing the four missing Takoradi Girls.

The court presided over by Justice Richard Adjei-Frimpong fixed the judgment date after counsel for the accused persons closed their defence Wednesday.

The prosecution is expected to file its written address on February 17, 2021, followed by that of the defence counsel on February 24, 2021.

They are expected to orally address the jury on March 3, 2021, for them to pass their verdict for judgment on Friday, March 5, 2021.

During cross-examination of the second accused person, John Oji, on Wednesday, he told the court that the purported social media conversations between him and the first accused, Samuel Udoetuk Wills, did not come from his phone.

He explained that the phone he was using does not support social media apps (WhatsApp and Facebook) and that the comments on Wills' phone can’t be his.

He said he was told about the missing Takoradi girls after he had been lured into Togo and Ghana by the investigators who arrested him without a warrant.

He said the phone he had on him and was handed over to the investigators does not support social media.

Oji said he was informed about the missing Takoradi girls who were said to have been kidnapped by the investigators after his arrest.

“I told them I am a salesman in Nigeria, they told me they have arrested Samuel Wills and he mentioned me as his accomplice.”

Oji told the court he struggled with the two officers who arrested him but he was overpowered and moved to the Criminal Investigation Department (CID) unit of the Ghana Police Service in Accra.

He told the court that on arrival at the CID office he received some slaps in his face and was later subjected to a series of torture but he told them he knew nothing about the kidnapping.

He said he first visited Ghana in 2017 and that he does not speak any Ghanaian language.

Asked which of the four girls he knew, Oji said he did not know any of them.

Wills, he said, is his maternal relative who invited him to Ghana the first time he visited the country.

Upon his arrival in Ghana, Wills directed him via telephone until they finally met. He said the phone number he used to call him was a Ghanaian mobile number but does not remember the number and the network.

He acknowledged he has known Wills for about 25-years since their childhood but they lost contact at some point.

He explained he visited Ghana for the time because Wills promised him a job as a Public Relations Officer or as a supervisor at a construction site and that he has a background in management sciences and training in health and safety.

He said Wills told him that he (Wills) was working in a construction firm and that on his next visit to Ghana, he will pay him the 110,000 Naira he (Wills) owed him.

In his response to the case before the court that he (John Oji) conspired with Wills to kidnap and kill the girls, Oji denied the charge.

He said he did not conspire with anybody at any given time neither was he introduced to the girls physically or on social media.

“Per the date of the said statement I was in the custody of the National Investigation Bureau from September 20th to November 13th. During my stay in custody, there was no interrogation and no visit,” he said.