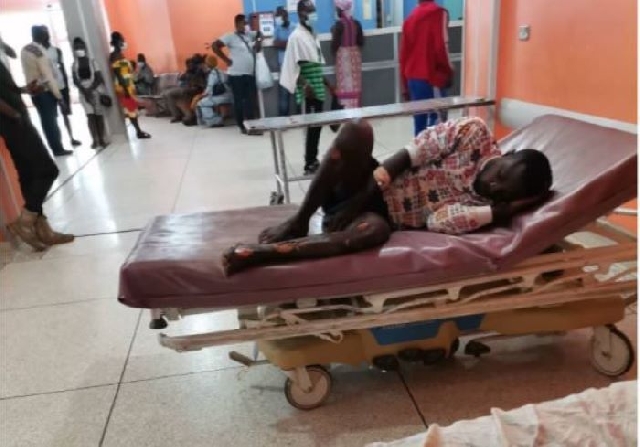 A 35-year-old driver has been arrested by the police after he allegedly set his family ablaze at Meduma in the Kwabre East Municipality of the Ashanti region after accusing the wife of having an extramarital affair.

The suspect, whose name was only given as Agyeman, after setting their house ablaze, attempted suicide by setting himself ablaze but was immediately rescued.

The incident occurred on Tuesday, March 16, 2021, around midnight.

Land Lady, Esther Gyamfi told Class News' regional correspondent Elisha Adarkwah that the suspect had accused the wife of having an extramarital affair because she had refused to sleep with him for sometimes now.

She said a day before the incident, the wife brought a new mobile phone home from the market although the suspect had asked her not to go.

Mr Agyeman accused the wife of getting the phone from her suspected boyfriend but the wife denied it.

The landlady said at midnight, she heard the wife screaming and shouting for help saying the husband had set them ablaze with petrol.

She said neighbours rushed to their room and were able to rescue the wife, a twin and a toddler but the other twin was burnt to death.

The suspect after committing the crime attempted suicide by setting himself ablaze but was rescued and arrested by the police.

The remains of the deceased have been deposited at the Ankaase hospital morgue while the injured have been admitted at the Komfo Anokye Teaching Hospital with the suspect who is under police guard.

In all, four rooms were burnt in the process.

Meanwhile, the personnel from the  Ghana National Fire Service from Mampongteng has commenced investigations into the fire incident.