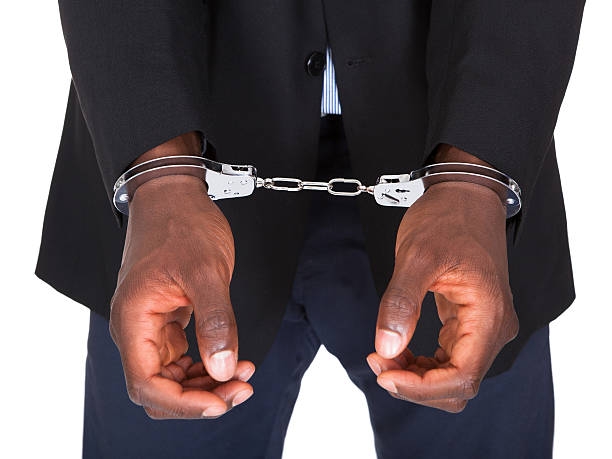 File photo of a man in cuffs

Sergeant Welbeck Agyina of the Osu Police Station CID, Accra, has been arrested for the alleged unlawful discharge of firearms during a durbar at Suhum in the Eastern Region, injuring seven persons, including two women.

The victims sustained varying degrees of injury when they were hit by the stray bullets and were sent to the Suhum Government Hospital for treatment.

Deputy Superintendent of Police (DSP) Ebenezer Tetteh, the Eastern Regional Police Public Relations Officer, told the Ghana News Agency that the incident occurred after the installation of Nana Ohene Fianko as the Akyempimhene of Suhum Traditional Area on Saturday, November 6.

Through police intelligence, a locally manufactured gun, 70mm BB cartridge, which the suspect identified as the weapon used for the act, was retrieved from the scene.

The suspect, Agyina, said to be a cousin of the newly installed sub-chief, also sustained an injury in his right palm and was taken to the Suhum Government Hospital for treatment.

Two of the victims have been referred to the Eastern Regional Hospital in Koforidua, while three are on admission at the Suhum Government Hospital, DSP Tetteh said.

The other two victims have been discharged, as well as the suspect, now in police custody, the PRO said.