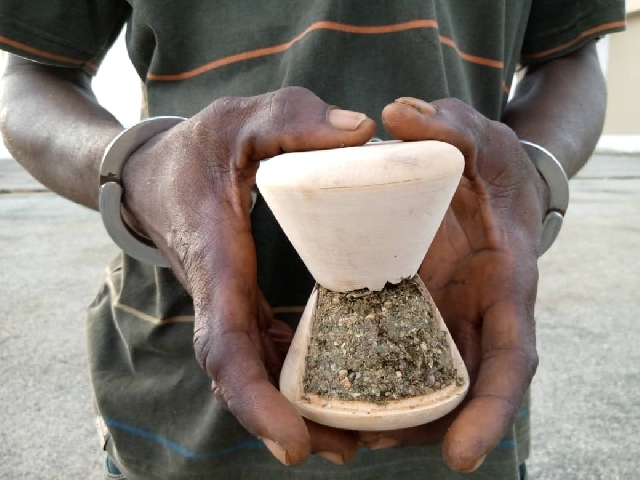 Illicit drugs stuffed in a woodenware

Two persons have been arrested by prison officers for attempting to smuggle marijuana and cocaine into the Ankaful prison in Cape Coast in the Central Region.

The suspects, identified as John Mensah and Margaret Amponsah, were arrested after they hid the drugs in food meant for an inmate.

According to Margaret Amponsah, one Desmond Asamoah, who is believed to be the owner of the narcotic drugs, asked them to give the food to an inmate, adding that they had repeatedly committed the crime successfully.

The suspects narrated that the owner of the narcotics parcelled the drugs in a sack and a Ghana-must-go bag and directed them to give it to one John Mensah but according to her, they did not find out exactly what was in the bag.

Upon reaching the premises of the Ankaful prison, the prison officer inspected the bag and revealed its contents.

Woodenware, eggs, a pestle, wrapped food, and several other items were found in the bag with quantities of marijuana and cocaine hidden in the woodenware.

Four mobile phones were also found hidden in one of the food packages.