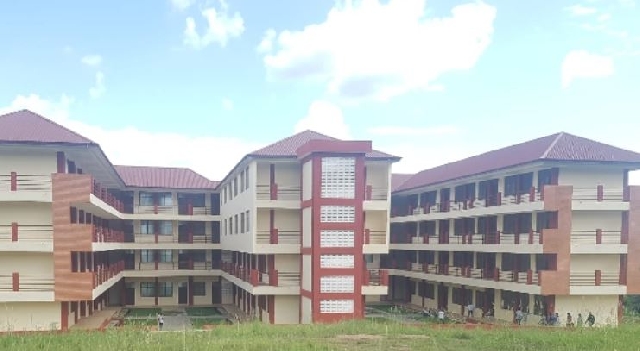 The governing New Patriotic Party’s New Juaben North Constituency Chairman, Mr Kwadwo Boateng Agyemang, has heaped praises on the Minister of Education for abrogating the contracts of some 27 E-blocks across the country.

To him, the termination of the contracts was long overdue.

He told Kwame Appiah Kubi on Accra100.5FM’s morning show Ghana Yensom on Thursday, 28 October 2021 that it should have happened a long time ago when it came to light that the main opposition National Democratic Congress did not leave any funds for the completion of those projects.

“Why should the current government hold onto the contract when the NDC government, led by former President John Dramani Mahama, did not leave any funds for the execution and completion of the school facilities across the country?” he wondered.

He commended Dr Yaw Osei Adutwum for the bold step taken to terminate the contracts.

According to him, many contractors in the NDC era collected the mobilization for the said projects and bolted with the cash.

He added that termination of those contracts was delayed because the ministry and the government had to take their time to honour the termination clauses so as to avoid incurring judgment debts.

Meanwhile, North Tongu MP Samuel Okudzeto Ablakwa has said that the Akufo-Addo government is able to find the money for “all kinds of useless” things but says it is unable to raise money to finish the 27 E-blocks.

Speaking to Valentina Ofori-Afriyie on Class91.3FM’s mid-day news 12Live on Thursday, 28 October 2021 about the decision by the government to terminate the contracts for 27 of the E-blocks over lack of money, the former deputy education minister said: “You’re seeing a government that has totally misplaced its priority, does not care about what will move this country forward; it is only interested in their own creature comforts. It is such an embarrassment”.

“This is a national disgrace and we must not accept this and we are waiting for the minister [of education] to come to parliament and see our approval for this decision and he will certainly be met with the kind of resistance that the people of this country expect from parliament”, he said.

He said the government “must prioritise education”, insisting: “These schools must be immediately completed”.

Reacting to the explanation by the government that the previous administration made no budgetary allocation for the construction of the 27 E-blocks whose contracts have been terminated, Mr Ablakwa said: “Nobody leaves money behind for any project”.

“You come; when the national revenue is raised, taxes are collected, you do your allocation, you prioritise what must be prioritised”, he noted.

In his view, the Akufo-Addo government has shown that education is not among its priorities.

“So, I am totally outraged at this decision; this is very disappointing”, he added.