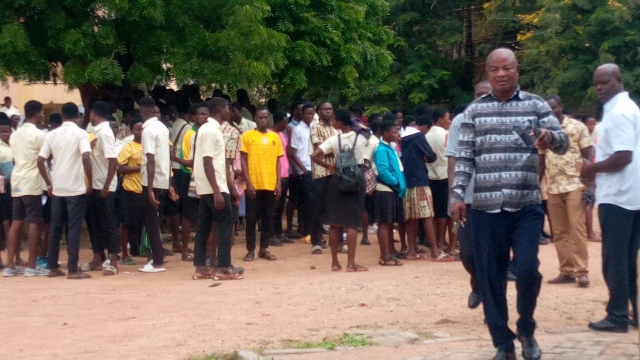 Some students watching on as their seniors went on rampage

The Upper East Regional Minister,  Stephen Yakubu has asked students of the Bolgatanga Technical Institute to leave the school premises before 4pm today, 2 August 2022, following the rioting of some final-year students.

The students destroyed school and staff properties after some of them were arrested on Monday, 1 August 2022 for entering the examination hall with foreign materials.

Mr Yakubu noted that he won't allow anyone to destabilise the existing peace in the region hence the school has been temprailly shutdown.

Some of the students were picked up on Monday, 1 August 2022 for entering the examination hall with foreign material.

The headmaster who confirmed the incidence to Class News speaking on 12 Live noted that the students were granted bail and were to return to the Police today.

While at the Police station, he got information that the students back on campus were agitating and demanding to see their colleagues.

The Police rushed to the scene to restore order but they were pelted with stones.

There is heavy Police presence on campus.