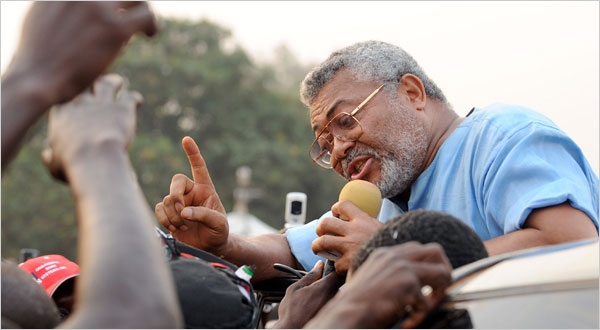 Former President Jerry John Rawlings has written to the Minister of National Security, Mr Albert Kan-Dapaah to give the former Vice-Chancellor of the University of Education, Winneba, Prof Mawutor Avoke, justice as far as his ousting from office is concerned following his exoneration by the Economic and Organised Crime Office (EOCO) of alleged procurement and management breaches.

The allegations were filed at EOCO against Prof Avoke and a few principal officers of UEW by Effutu MP Alexander Afenyo-Markin in May 2017 in connection with the award of contracts to Sparkx Ghana Limited for five district projects. But EOCO said there was no breach of the Public Procurement Act in the award of the contracts.

Also, EOCO cleared Prof Avoke of any wrongdoing in the award of a contract to Paa Badu Construction Limited to put up a 2000-bed hostel, another to C-Deck Limited for clinic extension works at Winneba, as well as the construction of a basic school at Kumasi.

Mr Afenyo-Markin had claimed due process was not followed in the award of all the contracts but EOCO found otherwise.

Despite EOCO’s exoneration of Prof Avoke, he still has not been reinstated, thus, his resort to Mr Rawlings for his intervention.

In Mr Rawlings’ letter to Mr Kan-Dapaah, the former President said: “Unfortunately, during the pendency of the investigations, the affected persons were dismissed from the university by the previous Council”.

“The action”, he noted, “has created a complex situation, leaving the exonerated Prof Avoke and his colleagues still out of work”.

“Honourable Minister, there is a clear case of injustice and the continued non-resolution of this matter is justice denied and untenable.

“As per the Professor’s request, I will be grateful if you can look into the merits of the latest developments and take the necessary steps in consultation with the relevant stakeholders that will be satisfactory, justifiable and equitable in the eye of the law.

“I count on your kind assistance and cooperation,” Mr Rawlings’ letter read.