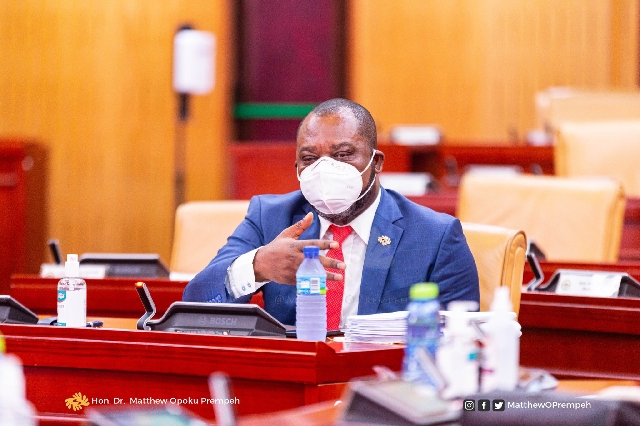 Former Education Minister Dr Mathew Opoku Prempeh has said he does not know the CEO of Bluegrass Limited in person and until his vetting on Friday, 11 February 2021, was not aware of his earlier arrest by the National Intelligence Bureau (NIB) on 29 January 2021.

The CEO of Bluegrass Limited was arrested by the NIB for allegedly failing to supply over 853,000 pieces of the mathematical sets in 2020 after he was contracted to do so.

Setting the records straight on the issue of the mathematical sets after his vetting on Friday, 12 February 2021, where the issue came up, Dr Prempeh, in a statement, said although the items did not arrive on time for the 2020 West Africa Senior Secondary School Certificate Examination (WASSCE) candidates due to COVID-19 restrictions, candidates of 2021 and beyond will benefit from them.

1. On 6th December 2018, Transnational Ltd wrote to the Minister, introducing Bluegrass Ltd and a scientific mathematical tool that is examination compliant (a maths set and a non-programmable scientific calculator combined).

2. Minister then wrote to GES on this matter, as the GES has a seat on WAEC International’s council and runs senior highs schools in the country. GES subsequently wrote to WAEC for further clarification.

3 On 5th February 2019, WAEC wrote back to GES and stated that the issue of malpractice had been discussed extensively in a retreat organised by the council in 2018 in Lagos. Members agreed that the council should formulate a policy requiring students to use only WAEC-approved sets of mathematical instruments.

4. Subsequently, WAEC wrote to GES to explain that the mathematical sets were designed with Cornfill Ltd.

5. On 12th February 2019, the Director-General of GES wrote to the Minister, copying him in on the WAEC letter of 5th February 2019 and a letter from Cornfill Ltd, recommending the procurement of WAEC-approved mathematical sets to be used in WAEC exams as they fall in line with WAEC recommendations and requirements.

6. On 12th March 2019, the Ministry wrote to the PPA for approval to procure the items by sole sourcing due to the urgency of having the instruments in place for the 2020 WASSCE, in accordance with the Public Procurement Act, at a price of GHC75 per item, totalling GHC63,975,675 for 853,009 pieces.

7. Unfortunately, the delivery of the items for the May/June 2020 WASSCE was delayed due to COVID restrictions which affected production abroad, and the first batch did not arrive in time for the benefit of the candidates. However, candidates for 2021 and beyond will benefit from them and the intention is to purchase them for all SHS students to enable them to familiarize themselves with the items in preparation for their examinations.

8. The first batch that was received has been paid for and the payment for the remainder will be made upon receipt.

9. The Minister does not know the CEO of Bluegrass Ltd in person and until his vetting on Friday 11th February 2021, was not aware of his earlier arrest by the National Intelligence Bureau (NIB) on 29th January 2021.