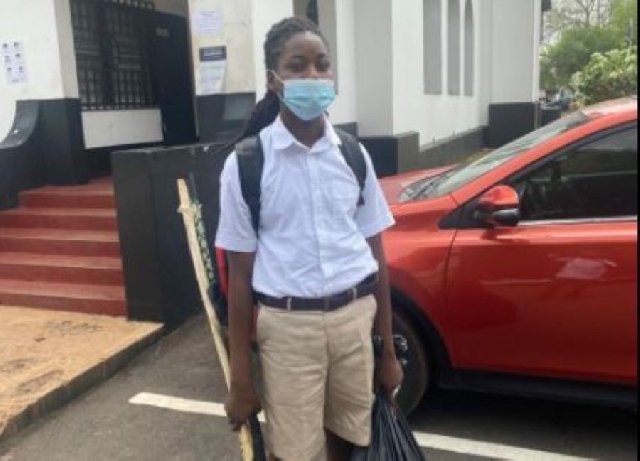 One of the student with dreads

The National Association of Graduate Teachers (NAGRAT) is opposing a directive by the Ghana Education Service (GES) for authorities of the Achimota Senior High School to readmit two Rastafarian students with dreadlocks.

The issue of their reaction has gone viral with divergent opinion.

The GES has, however, directed the headmistress of the Achimota School to with immediate effect, admit the two first-year students who reported with dreadlocks for them to begin the academic year with their colleagues.

Reacting to this development, President of NAGRAT Angel Carbonu unhappy with the GES directive told journalists at a news conference that if GES fails to reverse the directive, his members will join their colleagues in the school to take a series of actions.

“We have no option than to solidarise with our teachers in Achimota [School] and in any other school,” he stated.

He said NAGRAT will be a party to the suit threatened by the father of one of the boys.

“Any court case that will rise from this matter, NAGRAT will attach itself as an interested party in that court case because it will not serve our interest to limit this to rasta.”

He said the issue is not about the beliefs of the boys about obeying rules and regulations set out by the school.

“The issues have to be expanded to encompass the adherence to rules and regulations in senior high schools. And if the senior high schools do not have the right to make the laws, rules and regulations for their students let the court so rule and if that happens we will also come to the society and let you know how we are going to apprise ourselves to that court rule,” he added.

The issue was brought to light by Ras Aswad Nkrabeah whose son was a victim.

This morning, the school authorities of Achimota School claimed that their rules do not allow students with dreadlocks to be admitted. The school authorities denied two brilliant dreadlock students from being admitted after having been posted there by the Computer School Placement System. My son was one of the affected children and the other student was also refused on the same grounds. We have no option but to battle against this gross human right violation.

As a child, he has every right to his culture in so far as such culture do not breach the 1992 Constitution. He equally deserves the right to access education within his culture just like other cultural believers. As a Rastafarian, I think that dreadlocks do no way cause any harm which should even be a basis to be asserted by the school authorities.

The fundamental questions to ask is what does our law say about right to one's culture? Do you deny a child access to education based on his/her culture? Do public school rules override the supreme law of the land?

Tomorrow I will be on TV3 to share some light. Will give update on time.

Thank you for the Solidarity.