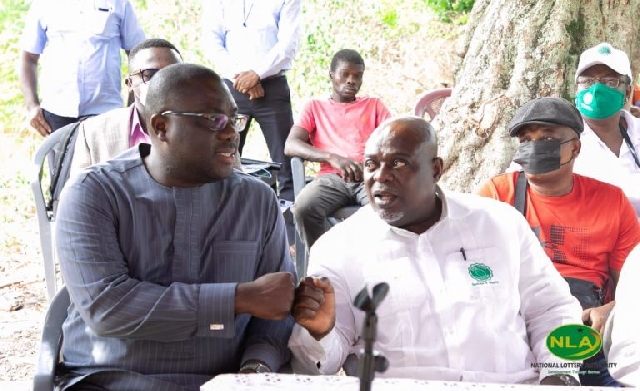 Sammi Awuku and Koku Anyidoho interacting at the programme

The National Lottery Authority (NLA), through Good Causes Foundation, has supported the Atta Mills Foundation to open a corn and cassava mill project, as well as renovate a three-classroom public school block for the people of Gonteng on the Aburi road.

Speaking after the exercise, the Director-General of NLA, Mr Samuel Awuku, said: “This is the first initiative of the Good Causes Foundation after its inception and we are glad to put a smile on the faces of Gonteng people through this partnership.”

Mr Awuku seized the opportunity to assure NLA loyal customers that “even if you don’t win the lottery, be rest assured that your money has been used for a good cause; that is to bless somebody elsewhere”.

He expressed his heartfelt gratitude to the Atta Mills Foundation for the opportunity given them to help and further assured the organisation of an even stronger partnership in the future.

He also expressed gratitude to the people of Gonteng for their selflessness and dedication toward the project.

“That is what partnership and collaboration are all about and we are proud to associate ourselves and partner with the Atta Mills Foundation for this charitable act. On the arm of the NLA, this will not be a one-day support wonder but we will also build upon what has begun,” he said.

“The NLA also accept the request of the Atta Mills Institute to build a long-lasting relationship and we want to assure them that just as they have been credible, transparent, and truthful with the little support and partnership we gave them, on behalf of the NLA, we are promising, through the foundation of the Good Cause, we will partner them to do bigger projects,” he added.

The founder and CEO of Atta Mills Institute (AMI), Mr Samuel Koku Anyidoho explained how he discovered Gonteng and why he chose to help the community.

He said: “About seven years ago, I came to Gonteng for the first time with a lawyer friend of mine in pursuit of nature. Very often, on my visits to this place, anytime I was leaving, I had to lift people from this place to Aburi, and on a few occasions, I lifted children who were carrying buckets of maize on their heads, walking all the way to Aburi to go and mill. Every time I gave the children a lift, and imagined the arduous and near-torturous walk on the undulating rocky road from here to Aburi, I cried in my heart for them”.

“The road was more horrible than you see it today, so, you can imagine what the children were going through. Out of the tears, I covenanted with God that when the time is right and given the opportunity, the Atta-Mills Institute would build a corn and cassava mill for the community for the single purpose of easing the struggles of the young children who have to trek to Aburi just to go and mill maize for family use”.

“So, for the record, the community did not ask for the project; God touched our heart to do it for them!”

“The Atta-Mills Institute approached the NLA with a proposal and by the kind grace of God, the Director-General, Mr Sammi Awuku, and his team saw reason with the proposal, and gave us some support, which has made it possible for us to be here today to commission these projects”.

“Mr Sammi Awuku, the people of Gonteng are grateful to you and your institution for partnering with the Atta-Mills Institute to bring them so much relief and joy”.

“There is no denying the fact that this is just the beginning of a very long, productive, and lasting relationship between the Atta Mills Institute and the National Lotteries Authority, as we hold hands in the pursuit of a common agenda of building a better Ghana. A better Ghana can be built and must be built,” he said.

The headmaster of the school, Mr Asamanteng David thanked Mr Koku Anyidoho and the NLA for the kind gesture and promised to use the facilities for their intended purposes.