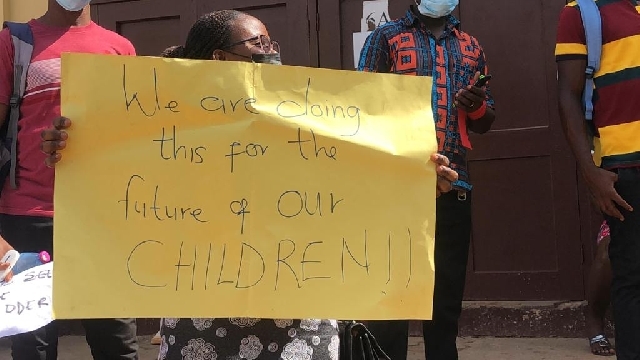 Okaikwei North MP Theresa Lardi Awuni has petitioned parliament to probe the takeover of Achimota Preparatory School by the Ghana Education Service (GES) and the Ministry of Education.

The petition was signed off by the Board, Management, and the Parent-Teacher Association of the school.

In May this year, scores of parents swarmed the premises of the school in the Greater Accra Region following the takeover.

Some held placards expressing disappointment with the action of the GES and its management.

They complained about the manner in which the school was taken over while the pupils were on campus, describing it as a "barbaric action" which "traumatised the children".

A court gave the GES the go-ahead to take over the running of the school on Friday, 30 April 2021.

GES officials in the Okaikwei North District locked up the school consequently.

The GES had always argued the school belonged to the government since the land on which it sits formed part of Achimota School Land per the Achimota School Ordinance No. 7 & 1948.

In January 2020, the Parent-Teacher Association (PTA) of the school vowed to resist any attempt by GES to take over the school.

The PTA said the school was a private institution and, therefore, the GES had no right to take over a private entity.

In a letter addressed to the Regional Director of the GES at the time, Ms Monica Ankrah, the PTA said the GES had failed to give any lawful reason, short of regulatory matters, why they would have to take over the management of another corporate entity registered and limited by guarantee.

“You are showing disregard for the pupils, staff and their livelihood on a whim and we deserve the right to defend our investment and reputation with any means possible,” the PTA said.

According to the PTA, Ms Ankrah said when the GES takes over, “all government policies to public schools shall be applied to the management of the school.”

The angry parents and teachers said they considered Ms Ankrah’s statement as grossly uninformed because short of regulatory matters, the school was not a public school and “it is certainly not government policy to go about taking over private properties.”

“Your office has no right to assume management of a school in which it is not party to, and which not subvented by government. Your action is tantamount to a hasty coup and meant to result in a physical clash,” they added.

The PTA further noted that if the Achimota school land was the basis of Ms Ankrah’s action, then she was engaging in selective action against APS because among several other occupiers of Achimota lands include the Girls Guide, the Centre for Scientific and Industrial Research, University of Ghana, several interdenominational churches, a police station, private commercial businesses, private garages and other private residential and commercial building.

The parents and teachers explained that the Achimota Golf Club operates on Achimota lands mostly as a commercial entity, but continues to occupy substantial portions of Achimota lands without any action from the Greater Accra Regional Director of Education, however, she has “resorted to concocting reasons to seize APS into government fold. This, we consider discriminatory for reasons that can only be described as unfounded.”

The school has about 700 pupils and more than 50 employees.

It was set up by expatriates in the colonial era for their children, staff of Achimota School and the University College of the Gold Coast.

The expats bequeathed the school to the locals but GES said Achimota School granted a lease to APS in the 1960s to allow it to operate from the premises but that lease expired in 1970.