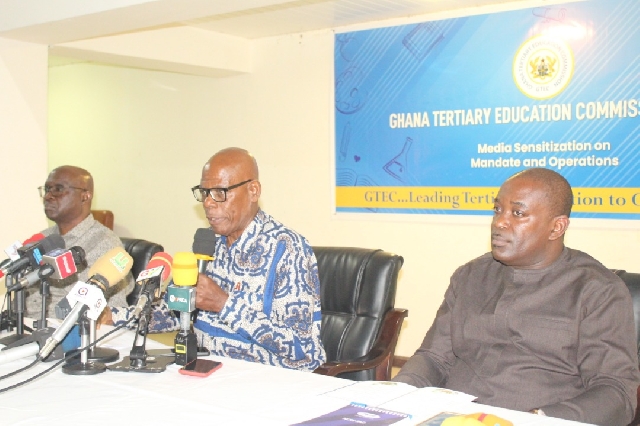 Prof Salifu, D-G of GTEC and his team

The university administration and governance body, Ghana Tertiary Education Commission (GTEC) has served notice it will be meeting the two universities that have been cited by the Auditor-General (A-G) for running over 600 unaccredited academic programmes on Thursday, September 15.

According to GTEC, the meeting with the Vice-Chancellors (VCs) of the two universities is to help address the issues in the A-G’S report that indicted the University of Ghana and the Kwame University of Science and Technology (KNUST).

The Deputy Director-General of GTEC, Dr Ahmed Jinapor said the meeting will help address the issue.

He said the A-G’s report has just ignited the need for some of the programmes run by the tertiary institutions to be properly accredited.

He explained that the accreditation committee of GTEC meets six times a year to address some of these issues.

He gave the assurance that the commission has the capacity to address the matter.

He explained that GTEC has been working with the tertiary institutions to have some of these lapses in the running of some of these unaccredited academic programmes addressed.

The GTEC meeting with the VCs is after an emergency at the behest of the sector Minister to help address unaccredited programmes at the tertiary education levels held on Friday, September 2, 2022.

Deputy Director-General of the Commission insists that there is no cause for alarm for students and guardians who read any of the programmes that had their accreditation expired.

He noted that the commission unlike the defunct National Accreditation Board (NAB) has the power to sanction and prosecute institutions which fall foul of the law governing tertiary institutions in the county.

He made the disclosure speaking in an interview with Accra-based Joy FM's Saturday news analysis programme News File.